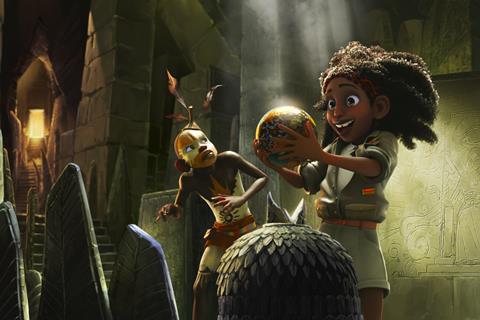 The production was scouted at the 2021 edition of animation co-production forum Cartoon Movie in Bordeaux, where it was one of the hot projects this March.

Billed as a family adventure film in the tradition of Indiana Jones, it revolves around a young girl who embarks on a perilous journey across the Horn of Africa in 1938 in search of her archaeologist father after he is captured by invading Italian troops loyal to Benito Mussolini.

Her path crosses a high-spirited young boy from an Ethiopian tribe who becomes her travelling companion. Against the backdrop of the territory’s archaeological sites and magnificent landscapes, the young heroine joins the resistance fight of a people whose ancestors were once the subjects of the Queen of Sheba.

The film is currently in production for expected delivery in the fourth quarter of 2024. Alexis Ducord and Benjamin Massoubre, who previously worked together as co-director and editor of monster theme park-set Cannes 2017 selection Zombillenium, co-direct.

The pair also take screenwriting credits with Emmanuel Leduc. Award-winning composer Éric Neveux is writing the score. Character design is by Julien Le Rolland, who also worked on Zombillenium as well as Asterix: The Secret Of The Magic Potion, Houdini and The Illusionist.

Gebeka International will introduce the project to international buyers at Cannes Film Festival and CAA Media Finance represents US rights.