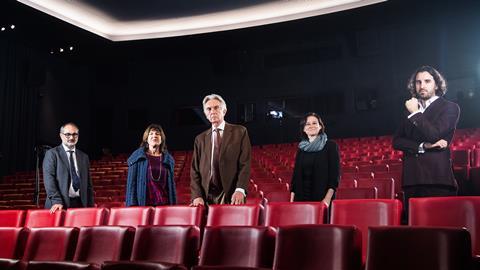 Giona A. Nazzaro has been named as Locarno Film Festival’s new artistic director.

He will take up his post officially from January 1, 2021, but will start working immediately alongside Nadia Dresti, who was appointed as the interim head of artistic direction in September and will remain in place until the end of December 2020.

Dresti will also continue to oversee the festival’s industry-focused Locarno Pro programme while the festival looks for a replacement for Valentina Merli, who left after just one edition at the helm to focus on her work as an independent producer.

In other roles from 2010 to 2020, he was a programmer and curator on the selection committee of the Visions du Réel Festival in Nyon, and has also collaborated with Locarno as a moderator. Nazzaro has worked with several other film festivals, including Turin, Rome and the Festival dei Popoli in Florence.

Nazzaro’s appointment follows the unexpected exit of previous artistic director Lili Hinstin at the end of September, after less than two years in the role, due to “diverging strategic views” over the running of the festival from the management team.

He thanked Hinstin for her work, saying she had played her part in growing the festival during her tenure in spite of the fiercely competitive festival scene for films and talent.

“With Lili, the verses of an obscure French poet from the 19th century come spontaneously to mind: ‘Even when the bird walks, we feel they have wings’. Lili is like those birds,” said Solari, citing the lines of French poet Charles Loyson.

“From the artistic point of view, things went well but there were strategic differences over the operational side of the festival but it’s time to close that chapter. There was a divorce, an extremely painful divorce and we don’t want to continue the pain with more words,” he continued. “It’s time to look to the future.”

Detailing how the festival had come to select Nazzaro, Solari said the board had debated whether to hold a competitive selection process or put together a blueprint of what it felt the festival needed in an artistic director at this time.

“I won’t hide that I was against the opening of a competition,” said Solari, noting that past artistic directors Irene Bignardi, Frédéric Maire, Olivier Père and Carlo Chatrian had been selected via the blueprint method.

He listed a series of conditions drawn up by the board which potential candidates had to meet. These included a strong sensibility for independent cinema; an adaptable, “resilient” nature capable of dealing with the uncertainties of Covid-19; an embrace of digital technology and its implications for festivals; and an ability to work with the entire Locarno team.

He also highlighted the fact that any incoming artistic director would need to respect the duality of the festival’s organisational structure, under which the artistic and operational sides of the event are managed separately.

“Twenty years ago, I introduced a double management structure, with one person responsible for the content, and another for the operational and financial side – both 100% independent of one another. No-one has the right to interfere in the area of the other. But at the same, either side shouldn’t see the other as an adversary but rather as a partner.”

Solari also highlighted the funding structure of the festival which relies on some 150 different public and private partners for support, noting it was important that however big or small the partners were, their involvement should be treated with care.

Joining Solari at the press conference in Locarno, Nazzaro said it was an honour to step into the role of artistic director, adding that he felt a sense of being among “family” at the festival where he has collaborated on and off since 2009.

“I will be setting straight to work in the hope of being able to reopen the Piazza Grande, the beating heart of the festival and an iconic symbol of the resilience of cinema,” he said.

Nazzaro, who is Italian by nationality but was born and grew up in the Swiss city of Zurich, said he would be renting an apartment in Locarno and intended to spend a substantial amount time in the city to get to know the local community as well as work closely with the festival team all year round and not only during the lead-up to the festival.

Solari said he hoped that Nazzaro’s tenure at the festival would last a number of years.

“It would mean, and I say this with a certain sadness but it’s inexorable, that he would be the last artistic director that I propose to the board in my role as festival president,” he said.

This comment prompted a question to Solari on how long he intended to remain as president of the festival, a role he has held since 2000.

“My reply is simple, as we expect him [Nazzaro] to remain for at least five to seven years, you’ll have to draw your own conclusions,” he said.