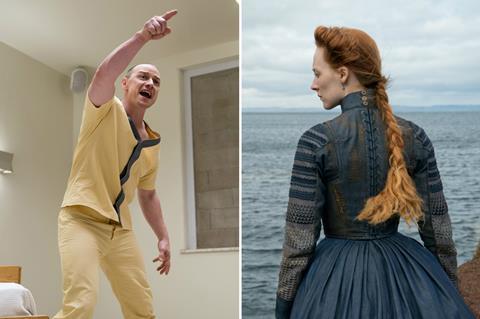 Glass comfortably opened number one in the UK this weekend with a £3.4m debut, including previews of roughly £100,000.

The film is a sequel to two of director M. Night Shyamalan’s previous works – Unbreakable (£11.6m gross in the UK) and Split (£11.4m) – starring Bruce Willis and Samuel L. Jackson from the former, and James McAvoy from the latter in an unusual take on the superhero genre.

Mary Poppins Returns was fourth this weekend, adding £1.7m with a slim drop of 26% on last weekend. The film is up to £40.7m in the UK, surpassing the lifetime gross of musical Les Miserables.

Ralph Breaks The Internet also registered a slim drop this weekend, adding a further £525,000 for £17.3m to date.

Josie Rourke’s Mary Queen Of Scots opened with a solid £2.1m UK bow from 503 screens this weekend, a location average of £3,733. The film stars Saoirse Ronan as Mary Stuart and Margot Robbie as Queen Elizabeth I as two feuding cousins in 16th Century Britain.

Beautiful Boy, Felix van Groeningen’s drama starring Timothee Chalamet, Steve Carrell and Maura Tierney in the story of a father trying to help his drug addict son, opened to a £252,313 Fri-Sun from 124 sites. With previews, the film’s opening is £361,382.

London Unplugged, the UK portmanteau drama starring Juliet Stevenson, grossed £533 from one showing this weekend and is up to £1,589 cume. The film has two sold out Q&As coming up this week in London.

Island Of The Hungry Ghosts, Gabrielle Brady’s documentary about millions of crabs migrating across Australia’s Christmas Island, is up to £9,227 in the UK after two weekends.