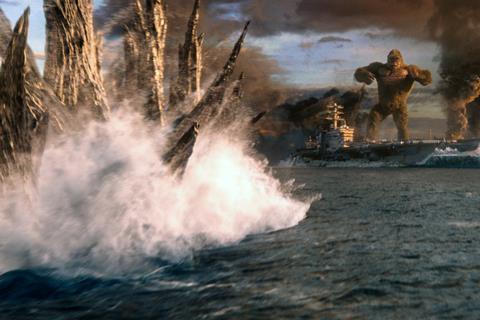 UPDATED: Warner Bros and Legendary are celebrating a strong $120m second global session for Godzilla Vs Kong, boosted by an estimated $48.5m five-day opening in North America, and strong holds in many international markets.

Godzilla Vs Kong’s box office compares favourably with Godzilla (2014) and Godzilla: King Of The Monsters (2019) at the same stage of their respective runs – overall up 83% on Godzilla in like-for-like markets, and 35% up on the sequel. Those numbers are skewed by China, where Godzilla only grossed $77.6m in its lifetime, and where Godzilla Vs Kong has already reached $136.5m.

The tentpole ranked number one in all international markets at the weekend except China, where it was beaten by a local title (see below). After China, top markets were Mexico, Australia, Taiwan and Russia.

The film cracked $200m in international markets in just 12 days, which compares with 24 days for Tenet. Godzilla Vs Kong looks set to overtake Tenet ($363m worldwide) to become the biggest Hollywood film released in the pandemic era.

Imax screens generated an estimated $8.5m at the weekend, and the Imax total of $23.5m is just shy of 10% of the international total.

Despite a strong $43.5m second session (-38%) for Legendary’s Godzilla Vs Kong in China, the CGI blockbuster was pushed off the top spot by Lian Ray Pictures’ release of local drama Sister, which surprised with a powerful $53.5m debut.

Ruoxin Yin (Farewell My Lad, 2020) directs from a screenplay by Xiaoying You (Love Education, 2017). Nineteen-year-old Zifeng Zhang (Go Brother!, 2018) stars as a young woman who must choose between pursuing an independent life and looking after her younger brother after their parents die. Confronting such issues as the privileged status of sons and the sacrifices expected of daughters, Sister has clearly struck a chord with Chinese cinemagoers.

Sister and Godzilla Vs Kong were both way ahead of other titles in the market. Three new releases round out the top five: Filmko Pictures’ Monkey King Reborn ($7.4m), Jiabo Culture Development’s The Eleventh Chapter ($5.2m) and Henglu Film and TV’s Tomorrow Will Be Fine ($3.6m). Drama The Eleventh Chapter (aka Ru Shi Ni Wen), from director/co-writer/star Jianbin Chen, premiered at Beijing International Film Festival in 2019. Director Yuan Yuan’s romantic comedy Tomorrow Will Be Fine stars Yilei Jiang and Zhang Chao respectively as a failing screenwriter and an unsuccessful singer who end up being forced to live together.

All China box office numbers are courtesy of Artisan Gateway.

UPDATED: Sony Pictures’ Peter Rabbit 2: The Runaway has reached an early $4.6m international running total and stayed strong in its second session in Australia, declining just 9% with weekend takings of $2.1m, and a total after 11 days of $4.2m. The sequel also landed in New Zealand, grossing $459,000 including previews in its debut frame, which is just 8% behind the pace of Peter Rabbit (2018).

The original grossed an impressive $20.7m in Australia, and $3.1m in New Zealand. Director Will Gluck returns for the sequel, in which Peter (voiced by James Corden) goes off for an adventure in the big city.

‘Nobody’ boosted by new openings

Bob Odenkirk (Better Caul Saul) stars as a man who becomes the target of a vengeful drug lord after he intervenes to help a woman being harassed by a group of men. Moscow-born Ilya Naishuller directs. Nobody next lands in South Korea (April 7), Spain (April 30) and Mexico (May 7).

Disney’s Raya And The Last Dragon is in a quiet phase while executive wait for cinemas to reopen in the major European markets. Thus far the animated fantasy adventure has amassed $58m and the lead markets are China ($19.1m), Russia ($11.4m), Australia ($4.8m), Japan ($2.9m), and South Korea ($2.6m).

Avatar’s latest tally stands at $2.083bn with the Chinese re-release generating $54.6m, and Pixar’s Soul has grossed $117.9m from international.’