Fox’s comedy drama climbs to number one in its third weekend of release. 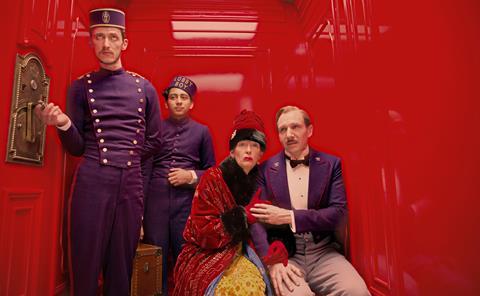 With a remarkably small 9% drop, The Grand Budapest Hotel has risen to the top of the UK box office in its third weekend of wide release.

Having adding over $3.3m (£2m) over the past seven days, it stands a great chance of becoming director Wes Anderson’s best-ever UK performer, above Fantastic Mr. Fox’s $14.9m (£9.03m) result.

Included in The Grand Budapest Hotel’s takings is the sold-out Secret Cinema run of the film, which has just been extended to April 6. By the end of the run, Secret Cinema will have provided a terrific $1.1m (£660,000) to the overall gross, following on from their success with one-off screenings of The Imposter and their run of Prometheus.

Fabien Riggall, founder/director of Secret Cinema, commented: “The film has become Wes Anderson’s greatest venture yet. We believe that we have established an important formula in which to release new films in the future.”

Fox also provided the week’s highest new entry in the form of Starred Up. The hard-hitting prison drama posted a non-final UK debut of $813,000 (£492,804) from its 316 sites, including previews, to chart sixth.

Released in 55 sites though eOne, Yves Saint Laurent started its UK run with $205,000 (£124,000), including previews. Despite being his third feature, the biopic is the debut UK release for director Jalil Lespert.

Rounding off this week’s top five was StudioCanal’s Non-Stop, which added $1.2m (£697,128) after dropping just 23% in its fourth weekend. Jaume Collet-Serra’s high-concept thriller is now up to $13.4m (£8.1m) and is currently the third biggest grosser for the distributor, behind Tinker Tailor Soldier Spy and Rush.

That tops the debut of director Pascal Chaumeil’s only other UK release, the French-language Heartbreaker, which grossed $198,000 (£119,742) albeit from considerably less sites at 59.

While not director Jason Reitman’s lowest-ever UK debut, Labor Day could only manage a somewhat soft non-final $456,000 (£276,831) bow from its 319 sites through Paramount.

Altitude’s Oscar winner 20 Feet from Stardom receives a wide release, while Artificial Eye’s The Past and Metrodome’s The Borderlands are among the films receiving a limited release.