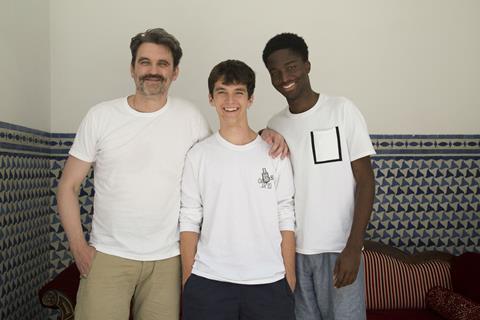 Sebastian Schipper with Fionn Whitehead and Stéphane Bak on the Caravan set.

Caravan follows William, a young man from the Congo (Bak) who attempts to break through Europe’s borders in search of his brother. He teams up with Gyllen (Whitehead), a wild and sharp-witted British runaway who has fled his family’s Moroccan holiday in his step-dad’s RV.

The shoot will last 11 weeks, commencing in Morocco before travelling to Spain and France, where it will film in Calais.

Studiocanal will release the film in Germany and Films in Rezo France.

Gabrielle Stewart, MD at HanWay Films, said: “Schipper is one of the most exciting filmmakers today, bringing a raw and visceral energy to all his work. We could not think of a better voice to tell William and Gyllen’s story, set against the backdrop of one of the biggest humanitarian crises of our times”