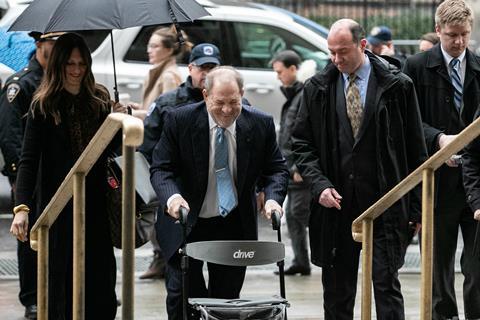 The first defence witness in Harvey Weinstein’s rape trial said on Thursday (6) he thought the former Hollywood mogul was a sex addict, but did not believe he was capable of committing the crimes of which he has been accused.

Writer Paul Feldsher also acknowledged sending messages to the former producer in which he disparaged the “dog pile of actresses” who had accused Weinstein of sexual misconduct.

Feldsher testified for the defence that actress Annabella Sciorra told him in the early 1990s that she had a sexual encounter with Weinstein but did not say she had been raped.

Under cross-examination by prosecutors, Feldsher, who was a friend of Sciorra’s, acknowledged that he had been in regular contact with Weinstein since allegations of sexual misconduct surfaced against the former producer.

“I think the dog pile of actresses who are suddenly brave and recalling repressed memories is hideous,” Feldsher wrote in one text to Weinstein. Dog pile is a slang term sometimes used to describe mass bullying of one person by a large group.

“I stand by the description,” he said of the text on Thursday.

Sciorra testified on January 24 that Weinstein forced his way into her apartment on a winter night in 1993 or 1994 and violently raped her. Though that allegation is too old to be charged as a separate crime, prosecutors hope it will show Weinstein is a repeat sexual predator, the charge that could put him in prison for life.

Feldsher was the first witness called by Weinstein, after the prosecution rested its case earlier on Thursday.

Under direct examination, Feldsher said Sciorra told him she had “done this crazy thing with Harvey,” and that he understood her to mean that she had “fooled around with him.” Feldsher said that they did not discuss it further, and that he had no indication it was a negative experience.

During cross-examining by prosecutors, Feldsher said he had stayed in touch with Weinstein because he “felt badly that he was completely abandoned.”

He acknowledged sending Weinstein text messages disparaging Sciorra in harsh language, calling her “full of shit” and “an asshole.”

“Well the rape version got her an agent at (Creative Artists Agency), so there’s that,” he said in one text.

Feldsher seemed surprised when presented with his messages by prosecutors.

“I’m learning a lot now and I had no idea my text messages would end up in a courtroom,” he said.

Feldsher also sent Weinstein texts criticising his behavior with women, telling him, “If a lot of these girls had been my daughter I would have wanted to beat the shit out of you.”

Weinstein, 67, has pleaded not guilty to raping former aspiring actress Jessica Mann and to sexually assaulting former production assistant Mimi Haleyi. Since 2017, more than 80 women have accused Weinstein of sexual misconduct. He has denied any non-consensual sex.

Weinstein’s defence case is expected to continue on Friday with testimony from Warren Leight, a director and producer who worked with Sciorra in the 1990s, and from Elizabeth Loftus, a psychology professor at the University of California, Irvine who will testify as an expert on memory.

EARLIER REPORT: Prosecutors in Harvey Weinstein’s New York rape trial wrapped up their case on Thursday morning (6), clearing the way for the former producer’s lawyers to begin calling their own witnesses in the afternoon.

Weinstein’s first two witnesses were expected to be film producer Paul Feldsher and director and producer Warren Leight. Both knew actress Annabella Sciorra, one of the six accusers who have testified for the prosecution.

Justice James Burke told jurors that the defence case is expected to take about three days.

Weinstein, 67, has pleaded not guilty to raping former aspiring actress Jessica Mann and to sexually assaulting former production assistant Mimi Haleyi. Since 2017, more than 80 women have accused Weinstein of sexual misconduct. He denies any non-consensual sex.

Thursday’s proceedings began with the cross-examination of Lauren Young, a model and actress who said Weinstein trapped her in a hotel bathroom and masturbated in front of her while groping her breasts in 2012.

Damon Cheronis, one of Weinstein’s lawyers, asked Young repeatedly about discrepancies between her testimony and earlier interviews she gave about the alleged incident.

Over the last two weeks, jurors have heard testimony from Young, Sciorra and four other women. Young is one of four “prior bad acts” female witnesses prosecutors called as evidence of Weinstein’s intent.

Last week, Mann testified that Weinstein raped her in 2013 in the course of a years-long relationship. Haleyi said he forced oral sex on her in his Manhattan home in 2006.

Sciorra testified that Weinstein violently raped her in her own home in 1993 or 1994. Though that allegation is too old to be charged as a separate crime, prosecutors hope it will show Weinstein is a repeat sexual predator, the charge that could put him in prison for life.

So far, Weinstein’s defence has consisted of cross-examinations in which his lawyers have sought to undercut the women’s testimony.

That has included highlighting friendly communications they had with Weinstein after the alleged assaults, especially in the case of Mann, who said she maintained a relationship with him for years. Defence lawyers have also sought to underscore any inconsistencies between the women’s testimony and earlier statements they made to investigators.

Loftus and Davis co-authored a 2015 paper in the Journal of Criminal Law and Criminology titled “Remembering Disputed Sexual Encounters: A New Frontier for Witness Memory Research,” in which they concluded that accusations of sexual assault often involve “honest disagreement in interpretation of consent between the parties” and that an “accuser may well falsely remember that she overtly said or did things that she only thought about.”

Loftus is expected to testify on Friday.

Burke has barred the experts from testifying specifically about memories of sexual encounters, saying such testimony would not be based on generally accepted scientific research.