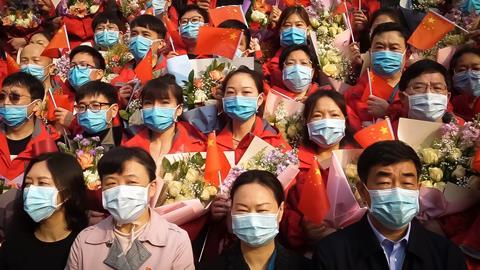 ‘In The Same Breath’

Hot Docs has revealed an additional 13 documentary features set to screen in the Special Presentations section of this year’s festival.

Among films that will get their international premieres in the section are In the Same Breath, director Nanfu Wang’s investigation (which had its world premiere at Sundance) into Covid-19 and the global health crisis it sparked; Homeroom, director and cinematographer Peter Nicks’ look at the anxieties and stress of a senior high school class; Street Gang: How We Got to Sesame Street, about the creators, artists, writers, and educators of the beloved children’s TV show; and WeWork: Or the Making and Breaking of a $47 Billion Unicorn, an exploration of the rise and fall of WeWork and its leader Adam Neumann.

Getting its world premiere will be Viral, Sagi Bornstein and Udi Nir’s Germany/Israel documentary following seven young people from across the world over the year of the pandemic.

The Hot Docs Festival will be available for audiences across Canada to stream from April 29 to May 9, with the full line-up set to be announced on March 23. The festival will also include industry conference sessions, market programmes and networking events for Canadian and international delegates. Full details here.