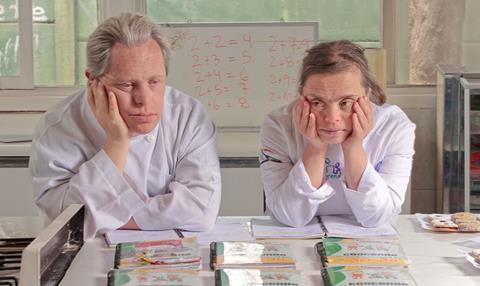 The International Documentary Festival Amsterdam (IDFA) has unveiled the line-up for its 29th edition, which is set to take place Nov 16-27.

It follows her award-winning Tea Time about five septuagenarians who have been meeting for tea and cake once a month for 60 years.

Other contenders include Mogadishu Soldier by prolific Norwegian documentary producer and director Torstein Grude; respected Polish documentarian Pawel Lozinski’s exploration of a mother and daughter’s relationship You Have No Idea How Much I Love You, and Gogita’s New Life by Georgian director Levan Koguashvili, which follows a recently-released prisoner’s search for a wife.

A total of 297 films will screen at the festival, 102 of which will world premiere. There were 3,496 submissions this year.

Other highlights include a retrospective of the work of Sergei Loznitsa.

The revered Ukranian director has also compiled the festival’s annual top 10 sidebar. Titles in his selection include Chantal Akerman’s From The East, Krzysztof Kieslowski’s I don’t Know and Soviet era classic Lullaby by Dziga Vertov.

This will be the last year in which IDFA’s founder and director Ally Derks is in full control of the festival. After this year’s edition, Derks is due to take a position as an invited fellow of the Robert Bosch Stiftung foundation in Berlin.

She will remain affiliated to IDFA in 2017 but on sabbatical and will then officially leave after the 30th-anniversary celebrations in November 2017. Filmmaker Barbara Visser will take over as interim director in 2017.

A real Boy’s Own story about two Danes who dream of building a rocket and making the first ever manned amateur flight to the moon.

Doctors in a Parisian hospital are fighting a life-and-death battle. Everything’s got to be cheaper, quicker and more efficient. A glimpse of imminent burnout in the healthcare system.

Following a lengthy term in prison, all Gogita wants is to be married. His mother lobbies for a pretty, slim girl in this tragicomic quest for love and happiness.

Tragicomic portrait of a Bulgarian border village where an ambitious postman looks for solutions to depopulation and the refugee crisis.

The beauty and devastating power of the ocean has fascinated many people. Including the filmmaker’s missing brother.

In Place of the Parents (Ireland/Spain) by Neasa Ni Chianain

A year in the life of two dedicated and passionate teachers at an Irish boarding school for young children, captured in affectionate observational scenes.

Like Dew in the Sun (Switzerland) by Peter Entell

Through the eyes of a compassionate outsider, documentary maker Peter Entell investigates why the Ukraine, where his ancestors lived, is so often at war.

A mesmerizing, rhythmic portrait of everyday life for workers at a textile factory in India. There is enchanting beauty here, but the film also reveals deplorable conditions.

The turbulent first year for a class of migrant children at a Dutch primary school; they learn Dutch, make friends and overcome traumas with inspirational help from Miss Kiets.

Filmed by soldiers, an honest and revealing look behind the scenes of the UN peace mission in Somalia.

Oppressive war report by Iraqi father and male nurse who is forced to flee when his home city is occupied by IS.

The painfully frank Xiuhua Yu – a farmer, disabled by cerebral palsy, unhappily married – makes a dramatic breakthrough as a poet. Will fame solve her problems?

What We Have Made (France) by Fanny Tondre

Beautiful, warm portrait of a huge construction site where thousands of men work long days among the scaffolding, concrete mixers and their colleagues, sharing good times and bad.