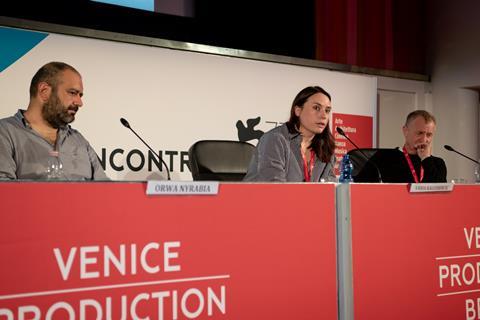 Fresh details have emerged about the fledgling International Coalition for Filmmakers at Risk (IFCR), which was launched late last year to support filmmakers facing political persecution.

Speaking at a special event in Venice, its founding bodies the European Film Academy (EFA), the International Documentary Festival Amsterdam (IDFA) and the International Film Festival Rotterdam (IFFR) revealed the body would be run as an independent foundation based in Amsterdam.

IDFA’s artistic director Orwa Nyrabia said the three founding partner organisations would each make a small financial contribution to get the foundation off the ground and that efforts were underway to begin to build “a small team” to coordinate the work.

“We’re not aiming to set up a big foundation so it’s not a massive budget although we will be looking for external funding,” he said. He added there were also plans to create a small fund within the foundation to help with the legal costs of filmmakers facing political persecution.

The creation of the IFCR grew out of the collective experiences of all three founding bodies in campaigning for filmmakers in trouble in the past, such as Ukrainian filmmaker Oleg Sentsov who was released from Russian custody exactly a year ago on September 7, 2019 after five years in captivity.

The aim is for the IFCR to verify reports that a filmmaker is in danger due to political persecution and then to galvanise efforts to free the director through either raising public awareness, exerting pressure behind the scenes via diplomatic channels or offering legal advice.

EFA chairman Mike Downey read out a short message from Sentsov at the event in Venice in which he expressed concern for artists in Belarus, amid the ongoing popular uprising against authoritarian leader Alexander Lukashenko, and urged the international film community to lend its support to the IFCR.

“Entire theatres are resigning, artists are experiencing illegal detentions, terrible beatings, large fines for their opinion, work, art, creativity. No human rights should be violated. No artist’s right to work should be violated. Each of us has an inviolable, guaranteed opportunity for both civic and creative expression,” he wrote.

“Each of us must take responsibility for the observance of these principles of freedom and art, coming to the aid of our colleagues, talking about the existence of this problem in society, highlighting it in our work and infospace. The European Film Academy, IFFR and IDFA is launching an important initiative – the International Coalition for Filmmakers at Risk, which I urge you to support because only together we are strong and able to change the world for the better.”

Nyrabia revealed that over the past six week the partners had already discussed seven cases of filmmakers potentially in acute danger. He highlighted the active cases of Egyptian film producer Moataz Abdelwahah, who was arrested last May, and compatriot film editor Saana Seif, who was picked up by police in June. Nyrabia suggested the Covid-19 pandemic had exacerbated the situation for filmmakers in some territories.

“It’s allowing extra license to many authoritarian regimes but also it is making incarceration much more dangerous,” he said. “The situation is only getting worse but we’re getting louder. We have a loud voice and we have to put it to good cause.”