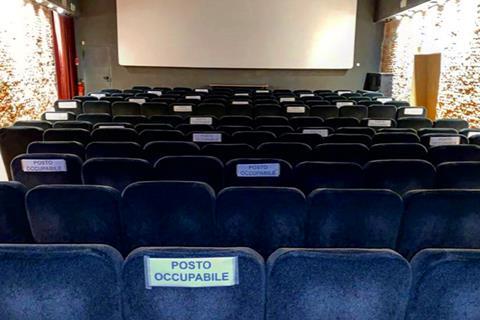 The Cinema Arsenale in Pisa - the label reads “Available seat”

Italian cinemas are now running at 30% of their capacity due to nationwide policies put in place this week by the Italian government to help curtail the spread of the new coronavirus.

Emergency regulations now require audience members at cinemas to be at least one metre from each until April 3. This applies to other live shows, theatres, football matches and gatherings and is in addition to the total shutdown of schools and universities and public spaces.

Mario Lorini, president of ANEC, the national association of exhibitors, has worked out how this can work for cinemas so they can keep their doors open: Since each seat is approximately 60cm wide, with two empty seats on each side and an empty seat in front and behind, every spectator should be able enough to comply with the one-metre ruling.

“We have estimated that in this way cinemas can run at 30% of their capacity,” said Lorini. “Though it’s too early to know how many of our associates will stay open and how many will choose to suspend activities.”

“We expected a much more restrictive measure, and we’re happy to see there is space for cinemas to be open though it’s all still a work in progress,” he added. “We have been working around the clock to have a better understanding of exactly what is allowed and what is not. Cinemas come in different shape and forms, big or small, we need to know how every exhibitor can manage to comply to the law and stay open.”

ANEC is still working with the Italian government to understand precisely the correct interpretation of the law.

“Many details still need clarification, for example since what has to be allowed is “interpersonal security distance” seems like it shouldn’t concern husbands and wives,” said Lorini. “But really it’s too early to say. We are all still figuring out what is best to do and as soon as we will have clarified with the ministry the correct interpretation of the law we will give our official advice.”

The situation is no clearer for distributors. “The consequences of a too-long extension of this situation will have a devastating impact on distributors,” said Roberto Proia, executive director, theatrical distribution and production at Eagle Pictures.

“We are constantly in talks with the exhibitors, and we will base our decision on release dates on what they will decide to do. If there are no theatre open movies can’t be released, as simple as that.”

A possible solution could be to release many more films than is usual in Italy in the spring/summer season. Only in the last year have a significant number of films opened in this period.

“It’s been a year and half since we started thinking on how to extend the season involving also the summer,” said Lorini. “This strategy brought great results last year and we’re confident the films that have moved their release date will now be able to find a space in that part of the year. If not, we will screen classic movies, we will use every weapon we have.”

Eagle, which has recently acquired the rights to distribute the new titles from Paramount, is thinking along the same lines.

“We distribute more than 30 films per year, and though we already had booked many of these for summer, from Spongebob to Top Gun: Maverick, I do agree that that will be the correct period to move the films to once we are out of the emergency,” said Proia about Lorini’s proposal to utilise summer for the postponed titles.