The Star Wars actor took home the best actor prize, but stepped into a social media storm following comments made in his acceptance speech. 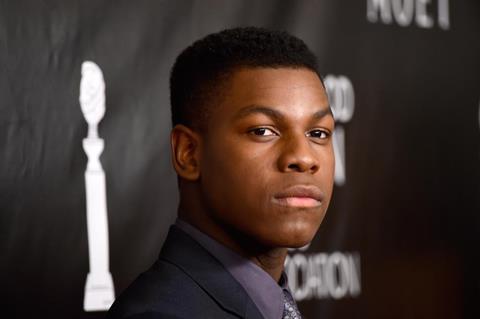 The Star Wars: The Force Awakens actor and former Screen Star Of Tomorrow was joined as a winner at the London event on Saturday [March 19] night by Nathalie Emmanuel, who won best Female Performance in Film for her roles in Fast & Furious 7 and Maze Runner: The Scorch Trials.

Dough and Jekyll & Hyde star Malachi Kirby, who has been cast in the forthcoming remake of Roots and is another former Screen Star, was presented with the Rising Star award.

Boyega was also nominated for the publicly-voted Favourite International Movie prize as the major UK talent in JJ Abrams’ Star Wars reboot, but was beaten by Idris Elba, Ama K Abebrese and Jude Akuwudike for Beasts Of No Nation.

On accepting his best Male Performance prize, Boyega addressed ongoing concern around diversity in the industry by saying: “To complain about what is going on is not going to benefit us.”

The comment provoked something of a backlash on social media, which led to Boyega later clarifying his comments on Twitter: “I am not saying that complaints are invalid or should not be heard…I am saying that words without action can’t help right now. I agree that we need to be heard but some do the talking and no work.”