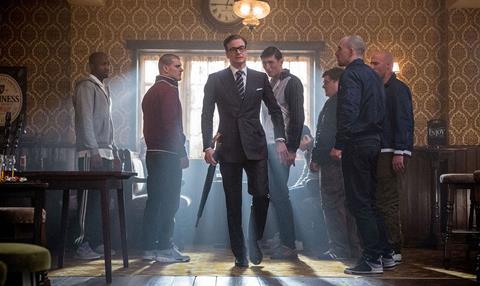 Kingsman: The Secret Service and latest James Bond outing Spectre topped the 2015 list of film complaints received by ratings body the British Board of Film Classification (BBFC), according to the organisation’s annual report.

Matthew Vaughn’s comic book adaptation Kingsman received 38 complaints from members of the public, with the primary reason being the level of violence in the 15-rated film, with one scene set in a church (featuring Colin Firth attacking a group of churchgoers) causing particular offence.

The BBFC comments that it saw an incomplete version of the film which would have received an 18 classification, and provided advice on how to reduce its rating by shortening moments of strong violence and not dwelling on pain or injury.

The organisation notes that one particular crude sex reference drew multiple complaints, but was left in the film due to comic context.

The BBFC also received several complaints regarding the decision to cut parts of the film to reduce its rating from an 18 to a 15, though it notes that the decision lies with the film-making team and not with the BBFC.

Sam Mendes’ final Bond outing Spectre, which received a 12A classification (meaning it is suitable for those above 12 years of age, but audience members under 12 can still watch the film accompanied by an adult), received 40 complaints, again primarily focused on the level of violence.

The BBFC report notes that the distributor sought advice on how to secure 12A classification, and a scene involving an eye-gouging was reduced to include limited visual detail, while further scenes involving torture and the aftermath of a suicide were also reduced.

Elsewhere, in a slightly more surprising turn animation sequel Minions received 16 complaints, which were aimed primarily at a medieval-style torture sequence where the protagonists are stretched on a rack.

The BBFC notes that the scene is delivered in a comical manner, and the risk of harmful imitation is very low, thus the film’s U rating (suitable for all ages) is appropriate.

The level of public complaints against these titles was minor, however, compared to the BBFC’s most complained about films on record. In 2008, Warner Bros The Dark Knight received 364 complaints alone.

Further titles to receive multiple complaints in 2015 include Simon Pegg-starring comedic Sci-Fi Absolutely Anything (primarily for swearing) and fantasy sequel Maze Runner: The Scorch Trials (primarily for violence and threat).

Cooke vacates the role after 12 years, during which time he has overseen three major public consultations into how the BBFC operates.

In the annual report, Cooke notes that the speed of classification has reduced from an average of 18 days in 2004 to six day in 2015, and that the cost for a distributor submitting a film fell 22% from 2007 and 2014. Both of these statistics were enhanced by the introduction of digital delivery for cinema content last year.

A major ongoing concern of the BBFC is the continued evolution of the home entertainment market away from physical media to online delivery. While traditional media requires certification by law, online providers are self-regulatory.

In 2015, the BBFC classified 1,143 hours of online content for exclusive VoD releases, with the organisation receiving 74.5% more submissions than in 2014.

The report notes that 28 brands operating VoD services licence and display BBFC age ratings, with Amazon and Disney making use of the classifications for the first time in 2015. Netflix extended its relationship with the BBFC last year by classifying its original children’s and documentary content for the first time.

Both Film4OD and CinemaNow were amongst the services not utilising the BBFC’s classifications.

Separately, a piece of research commissioned by the BBFC last year saw researchers conduct 3421 interviews to measure attitudes towards the classification of VoD content. The research concluded that 85% of UK parents consider it important to have consistent classification for content across theatrical, online and offline.

A further change in 2015 saw the BBFC appointed as the voluntary regulator of mobile network EE’s ‘strict’ parental control setting, meaning the BBFC determines what website content is suitable for children under 12 to access via mobile, in accordance with its PG rating.