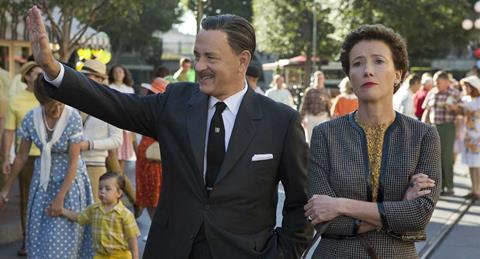 The London Film Festival (Oct 9-20) is to close with the European premiere of Disney’s Saving Mr Banks, the story of how Mary Poppins was brought to the big screen.

John Lee Hancock (The Blind Side) directs Emma Thompson as the author of Mary Poppins, P.L. Travers, and Tom Hanks as Walt Disney.

The decision means Hanks films will bookend the festival, which opens on October 9 with Paul Greengrass thriller Captain Phillips.

Hancock, Thompson and Hanks are all expected to attend the closing night gala.

Owen said: “Saving Mr Banks is very much about British manners versus American values, as Pamela Travers and Walt Disney battle over the rights to Mary Poppins, so it feels absolutelyfitting that the LFF Closing Night should be our European Premiere, and we feel very honoured.

“We filmed the London sequences in the street where Pamela lived, and London was both the start of the journey for Mary Poppins and for our movie, so we feel like we’re beginning in the right place.”