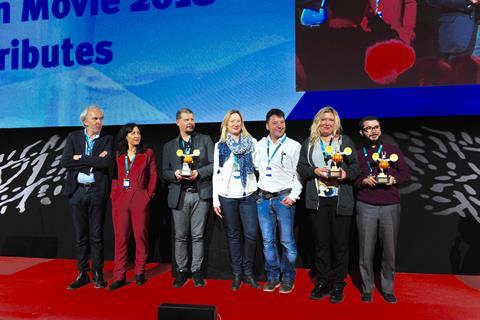 The 20th edition of Cartoon Movie, the annual European animation industry event, came to a close today with the announcement of the winners of its key prizes.

The winner of the Eurimages Co-production Development Award, which comes with a cash prize of €20,000, went to Turkish filmmaker Sinem Sakaoglu’s stop-motion animation project Kara, which is being co-produced by Visual Distractions (Germany) and Beast Productions (Belgium).

The award, one of a number of development grants given out by Eurimages at European film events, is designed to aid a project with a lead producer based in a Eurimages territory.

The jury said that they were impressed by Kara’s “visual poetic approach based on the cultural identity of the director”.

At this year’s Cartoon Movie, held in the French city of Bordeaux for the second successive year, further prizes, voted for by participants, were handed out to recognise ‘outstanding contribution to the development of European animation over the last year’.

Director of the year was given to Dorota Kobiela (Poland) and Hugh Welchman (UK) for their Oscar-nominated feature animation Loving Vincent. The three other nominees were Nora Twomey for The Breadwinner; Arthur de Pins and Alexis Ducord for Zombillenium; and Benjamin Renner and Patrick Imbert for The Big Bad Fox And Other Tales.

Distributor of the year went to Spanish outfit Latido Films. Established in 2004, Madrid-based Latido is launching two animated features this year: Buñuel In The Labyrinth Of The Turtles and Memorias De Un Hombre En Pijama. At last year’s Cartoon Movie, Latido revealed that it was looking to ramp up its animation offering.

Producer of the year went to the team behind Another Day Of Life, the feature animation that had a sneak preview shown here in Bordeaux. The producers on the project, which is set in 1975 and follows a veteran Polish journalist who is dispatched to cover a civil war in Angola, are Platige Films (Poland), Kanaki Films (Spain), Walking the Dog (Belgium), Wüste Film (Germany), Animationsfabrik (Germany), and Puppetworks (Hungary). It was directed by Raul de la Fuente and Damian Nenow.

Over the course of the last two days, some 60 animation projects from 22 countries Europe have been presented to the 900-strong crop of attending delegates.

The project is being directed by Lorenzo Mattotti, the Italian illustrator whose work includes designing several front covers for The New Yorker; this will be his feature film debut.

Co-producers on the film are Indigo Film from Italy and France 3 Cinéma and Pathé from France. Wild Bunch is handling sales. It will tell the story of the king of the bears, whose son is kidnapped by hunters in the Sicilian mountains, prompting the king to invade the land of men to recover his lost heir.

Also prompting good feedback was Hoodoo from French-American screenwriter, director, and producer Fabrice Ziolkowski, whose credits including being the writer of the Oscar-nominated The Secret Of Kells.

The US-set animation Hoodoo is a musical tale following 11-year-old Luanne Carver who hopes to get to the bottom of a mystery: did her bluesman grandfather, Leroy Terrell, really make a deal with the devil to become a musician and is she the victim of a curse?

Co-producers on the €4m project are Poland’s Letko and India’s Bioscopewala Pictures and Studio Eeksaurus. The team has already enlisted two multi-Grammy-winning Blues musicians: Keb’ Mo, who is the project’s musical director, and Taj Mahal, who will voice act and sing in the film.

Cartoon Movie will be returning to Bordeaux for its 21st edition on March 6-8, 2019.