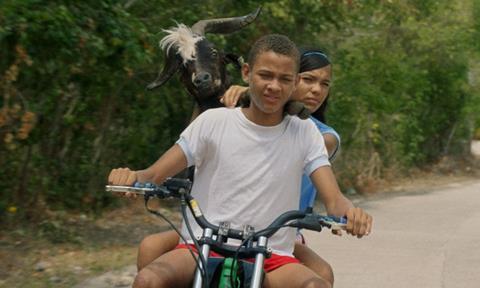 Set against the backdrop of a Colombian Caribbean island, the comedy revolves around a farcical 24-hour adventure set in a motion when two warring teenage siblings accidentally kill a bearded goat with their father’s truck.

They set off on a journey of reconciliation across the island, attempting to raise the money to repair the truck in time to pick up a group of tourists staying at their family’s hotel. The story brings them into a contact with a host of colourful characters, from Rastafarian drum-makers to the local witch-doctor.

“We’re extremely happy to handle this charming and fresh Caribbean-set story driven by energy,” said Luxbox co-chiefs Fiorella Moretti and Hedi Zardi.
“We were immediately seduced by Oliveros’ colorful mise-en-scene and natural sense of rhythm in this adventure comedy taking place is a stunning Caribbean island.”

Bad Lucky Goat, is Oliveros’ first feature after studies at the School of Visual Arts in New York. He raised the $60,000 budget to shoot the film in Old Providence in the Colombia Caribbean through Kickstarter.

“Bad Lucky Goat is a small tale about a small accident in a small island. We were not expecting all these BIG things. We could have never predicted a world premiere at SXSW,” said Oliveros.

“The reviews have been great so far and the audience seems to really enjoy it. Hearing the theatre laugh is such a fantastic feeling, the ultimate proof that the film is working. We believe Luxbox is the best possible ally to take this island story to the rest of the world where we know people will enjoy watching it.”