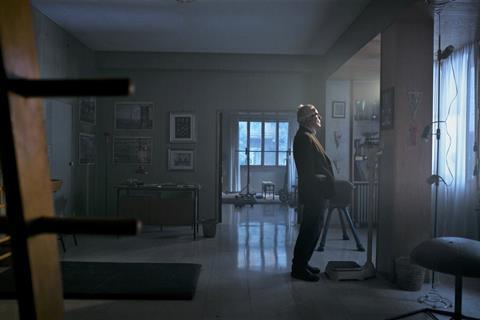 Italian director Marco Bellocchio, renowend for fiction films including Fists In The Pocket and The Traitor, now in his early 80s, told an audience at International Film Festival Amsterdam (IDFA) how Marx Can Wait, one of his rare forays into documentary, was an attempt to understand why his twin brother, Camillo, was killed by suicide in the late 1960s.

At the time the filmmaker’s career was beginning to flourish and Camillo’s death coloured his subsequent career. More than 40 years later, Bellocchio’s family come together for a dinner with a psychiatrist and a priest in an attempt to come to terms with the trauma.

Marx Can Wait, for which The Match Factory is handing international sales, made its debut at Cannes in July in the new Premiere section. It is screening at IDFA in the Masters section. Strand Releasing has picked up US rights this week.

The director himself features prominently in front of the camera.

“It’s the first, the only and possibly the last film where I am also “acting” in it,” Bellocchio told the audience in Amsterdam’s most ornate movie theatre, The Tuchinski, via Zoom from his home in Italy.

“II realised the film was not about finding who was guilty [for the death] but telling about the lack of sensitivity within my family. How was it possible that we, as brothers and sisters, didn’t understand how desperate our brother was.”

One of the key figures in the documentary is the director’s older sister, who is deaf and dumb. She was able to speak freely, with subtitles used to convey her words, about the circumstances in which she found Camillo’s body.

His grown up children are featured in the film. They listen but do not speak. “Their presence is very important,” Bellocchio says. “Of course, they did not know about the tragedy or have first- hand experience about it.”

The children asked him some very searching questions about Camillo’s death and how, for example, Bellocchio had forgotten about a letter his brother sent him.

The documentary includes many autobiographical fragments from Bellocchio’s movies, among them Fists In The Pocket.

A psychiatrist is also interviewed at length and tries to make sense of events surrounding the suicide.

The priest, meanwhile, provides pithy critiques of Bellocchio’s films (he is a film critic as well as a Jesuit) while also offering consolation to the family. In particular, he tried to reassure Bellocchio’s mother that Camillo would not be damned because of his suicide. “He also wanted to save Camillo for the afterlife. That was a very nice touch,” said Bellocchio.

The filmmaker said the documentary has helped unite his family. “The long years it took to make this film brought us closer together and gave more confidence to us as we were deconstructing the past and rebuilding family ties,” he said. “ I would say we did not accuse each other but happily we learned to love each other more.”

Marx Can Wait was released in Italy by 01 Distribution.

IDFA is taking place as a physical event in Amsterdam until November 28.