Mark Cousins destroys his own film with an axe at IFFR

British filmmaker’s unusual stunt made for one of the quirkier moments of IFFR 2017. 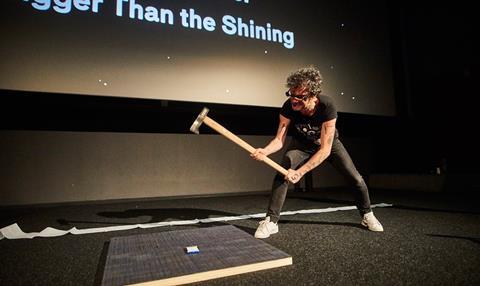 In one of the more unorthodox moments of the 2017 International Rotterdam Film Festival (IFFR), following a screening of his film Bigger Than The Shining, British filmmaker Mark Cousins literally axed the film’s DCP (digital cinema package).

In full view of the audience in Rotterdam’s Pathe cinema, where the film was screened on Wednesday (Feb 1), Cousins destroyed the DCP, with the intention being for it to never be shown again.

Originally commissioned for IFFR 2016 and world premiering there before also screening at the Edinburgh International Film Festival, the documentary is designed to be a provocative experiment exploring subjects including copyright, male rage, and was made by combining footage from Stanley Kubrick’s 1980 horror classic The Shining and Nicholas Ray’s 1956 melodrama Bigger Than Life.

Screen caught up with the filmmaker to ask about the unusual event.

Literally destroying your film in public is an usual move, where did that idea come from?

I think I always intended to destroy Bigger Than The Shining. It’s an experiment and a provocation which should probably only exist for a short period. It’s a hybrid of other films, so a long life for it is not justified.

It’s a bit like the two main characters in La La Land: The two films in my movie meet and have fun, but it was never going to last. It becomes a memory.

Why did you use an axe?

Jack Nicholson’s axe scene in The Shining. My film is about male rage and fear. I’m passionate about film preservation and am involved with some organisations in India and China that restore films but, as Freud said, you can represent a thing by its opposite.

Was that the only existing copy?

Some people have links to the film but I’d encourage them to destroy those too.

Are you working on any new features? Are they at risk of being axed in the future?

My film Stockholm My Love comes out this year - March in Sweden, June in the UK. I definitely won’t destroy it. I have three more films on the pipeline, but none are yet announced.