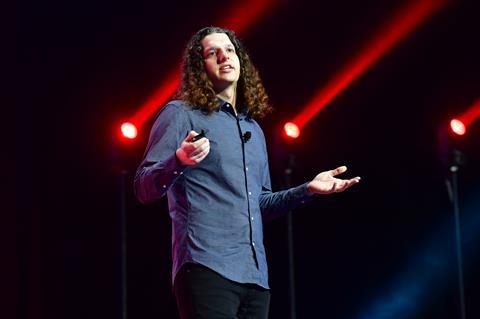 Facebook’s head of content strategy and planning Matthew Henick heralded a new era of “social entertainment” as smartphone ownership and social network engagement proliferate, in a keynote speech at MIPTV on Monday (April 9).

Henick, who has just moved to Facebook from his role as head of Los Angeles-based BuzzFeed Studios, said it was time to stop viewing smartphones and other smart devices as an extension, or smaller more portable versions, of the TV screen.

“Smartphones are not little televisions,” he told assembled industry in Cannes. “Mobile is social… phones are meant to connect people. Television is not a social device… it’s a window.”

Henick highlighted a study showing that while some 70% of Netflix subscribers connect to the service via a smartphone or laptop, most of them viewed its content on a television screen. Instead, viewing on smartphones was increasingly coalescing around other types of content, rather than traditional television or cinema fare.

“There’s more creation and consumption happening than ever before in global society,” Henick said. “There are more words being written and read on platforms like Twitter, more photos being taken and viewed on Instagram and SMS, more video being shot, screened and viewed on Facebook and YouTube.”

“But none of it, even the best of it, whatever that means, is making its way into television or film. It is happening on the 2.4 billion smartphones in existence in the world, a number which is set to double in the next three to five years.”

The executive suggested that this new content would require different production processes such as two scripts, one version directing the action in front of the camera on screen, the other taking into account how the audience might engage with the content.

“It opens up the possibility of constant engagement, not confined to a programme schedule. The consumption is active. It’s not a lean-back experience. Social content also prioritises the connection between viewers and not just their connection to the content.”

Henick cited comfort food show Tasty, which BuzzFeed made for Facebook where it has garnered some 93 million followers to date; hit phone-only, live game show HQ, which is open to an unlimited number of players; and the Norwegian teen drama hit and Facebook acquisition Skam, which expanded its scope beyond the small screen through the social networks.

“The interesting thing about Skam is that the story takes place in real time. You can watch it in weekly episodes but when a character is at a party for instance at 10pm on a Saturday that scene is live-streamed so you can actually enter the universe of the characters and live in it, which is very unlike binge-watching, where you’re sitting in your room by yourself for seven hours.”

Examples of scripted “social content” such as Skam remain relatively rare, said Henick, adding that for now most shows in this emerging scene were unscripted.

He also noted Facebook’s recent deal with Major League Baseball to show games once a week on the platform, allowing fans to connect around a game online rather than through going to the stadium or a sports bar.

Summing up, Henick said of “social content”: “Not everything has to be live but you shouldn’t be shooting things nine months prior, getting them in the can and then just putting them out there. You need the ability to respond to the audience. This applies to all content types, scripted, non-scripted, sports, news.”

Quizzed in a post-keynote Q&A by Jesse Cleverly of Bristol-based IP incubator Wildseed Studios about potential financial models, Henick said it was “up in the air right now” but suggested subscription, ad-based hybrid packages were likely to develop to fit individual users.

“On the news side, we’ve seen Facebook put in subscription funnels for news providers. I don’t know exactly what the entertainment side will look like but there are some models that are coming together.”

Alluding to his previous role at BuzzFeed, Cleverly also asked whether Henick would be resorting to “click-bait” tactics to draw viewers to video content on Facebook.

Henick replied that the challenge went beyond this given the platform’s vast and diverse 2.2 billion-person userbase.

“We want to hit as many of them as possible and we’re not going to hit them with a single or even 10 shows, but rather hundreds if not thousands of them,” he said. “That’s not to say that Facebook is going to make them. We want to have an open enough platform that anyone can make content for us and find that particular audience.”

The keynote chimed with the MIPTV conference programme this year, which includes a number of talks in its Next Gen strand revolving around the topic of producing content for the social networks, including Snapchat and Facebook.

Newly-appointed Henick did not comment directly on the drama, aside from a deadpan quip about his recent move to the company

“Since agreeing to give this talk, I changed jobs. I was at BuzzFeed running their studio and decided I wanted to go somewhere that had a lower profile, wasn’t in the news too often, and started at Facebook two weeks ago today. It has been an interesting ride,” he said.