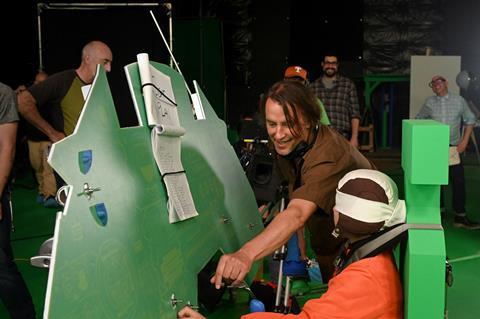 Richard Linklater on the ‘Apollo 10 1/2: A Space Age Adventure’ set

The streamer is also believed to be planning a qualifying theatrical run for the film, which is being produced by Linklater’s Detour FilmProductions and Dutch company Submarine.

Inspired by Linklater’s childhood in Texas, Apollo 10 ½ tells the story of the first moon landing in the summer of 1969 from two perspectives: that of the astronauts and mission control directors and that of an excited child living near NASA and watching the events on TV.

Writer-director Linklater, who previously used innovative animation techniques on features including A Scanner Darkly and Waking Life, is employing a mix of hand-drawn and computer animated imagery to tell the story.

The live-action shoot for the film wrapped in March in Austin, Texas, and the project will be completed at Austin animation facility Minnow Mountain and at Submarine’s animation studio in the Netherlands.

In a statement, Linklater said: “It struck me years ago that this was my film to make, from both a chronological and proximity level - I was there, going into third grade. Our unique animation style allows both the conjuring of a world long gone, and the flowing, playful expression of memory and imagination. It’s been a fun, creative journey to incorporate things like 3D graphics into a live action shoot to help bring this story to life.”