Sony score second number one in as many weeks as One Direction: This is Us debuts with $5.5m (£3.5m), including previews. 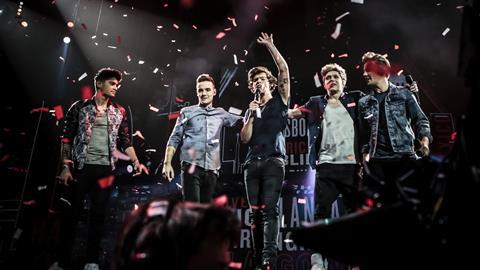 1D fever has hit the UK box office as Morgan Spurlock’s One Direction: This is Us has landed top of the chart on its debut.

Now it’s just a case of seeing whether the One Direction film can top the $15.3m (£9.8m) generated by Michael Jackson’s This is It to become the biggest concert documentary in the UK.

Completing a one-two top of the chart combo for Sony, last week’s number one Elysium added $1.9m (£1.2m) in its second weekend.

Posting a strong holdover, We’re the Millers enjoyed a $1.7m (£1.12m) second weekend in the UK as it fell to third.

Warner Bros’ comedy is now up to $6.3m (£4.1m) after ten days in play, although still has some way to go to match the $15.6m (£10.03m) achieved by director Rawson Marshall Thurber’s only other UK release, Dodgeball: A True Underdog Story.

Direct comparisons are tricky, given the film’s somewhat niche appeal, but the film compares favourably with Bad Boys’ $1.3m (£843,940) opening back in 1995.

For want of a better comparison, stablemate (and equally delayed) horror The Cabin in the Woods was released last year on 414 sites, resulting in a $2.5m (£1.6m) debut, but arguably benefitted from a more established name in the form of Joss Whedon.

This week sees saturation releases for Universal’s About Time and eOne’s Riddick, both released on Sept 4.

Peccadillo’s Any Day Now receives a wide release, while Artificial Eye’s The Great Beauty, The Works’ Ain’t Them Bodies Saints and StudioCanal’s Pieta are among the films receiving a limited release.