Paul Schrader: 'television has lost some of its allure' 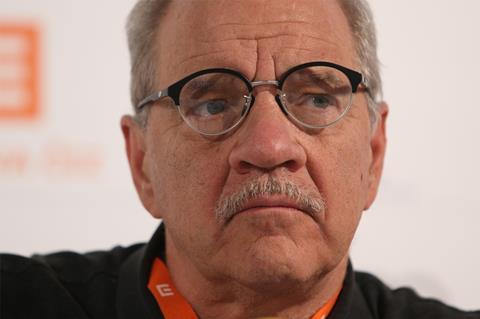 Writer-director Paul Schrader, who will attend the International Film Festival Rotterdam on Monday (29 Jan) to give a Masterclass, has predicted that he will finish his career working in cinema - and he has warned that TV drama is not the haven for filmmakers that it recently seemed.

“I think I’ll finish out working for the cinema particularly now that television has lost some of its allure,” Schrader said. “You know, there are 500 scripted TV series now being made. Do you really want to get into that world?”

The veteran filmmaker added that the “so called freedom of TV is not as free as you might think”. He said that his latest feature, First Reformed (which premiered in Venice and which is screening at IFFR), could not have been made for television, which is why he plans to stick to making movies. “I think I’ll try to ride that old broken-down horse into the cinematic sunset.”

First Reformed sees Schrader moving into Ingmar Bergman territory. Its main character, the anguished priest played by Ethan Hawke, is suffering the same crisis of faith as the pastor in Bergman’s 1963 classic, Winter Light. Schrader throws in references to Tarkovsky’s The Sacrifice (some levitation) but mixes them with the same machismo found in his screenplay for Martin Scorsese’s Taxi Driver.

Schrader revealed that he was inspired to make First Reformed after meeting Pawel Pawlikowski, the Polish-born, Oscar winning director of Ida.

“Before I became a screenwriter, I had written a book on spirituality and so it was obviously a subject that interested me but once I started making movies, I didn’t think I would ever make a film about the spiritual life. I was too interested in empathy, action, emotion and sexuality,” Schrader said. Then he saw Ida, “a very austere” film shot in Academy ratio in black and white, and met its director.

“I left that dinner and said to myself ‘you’re going to be 70 soon. Maybe it’s time for you to write one of these.’ That is how it began,” Schrader said of the meeting with Pawlikwoski. “Even though, it is part of a journey begun when I was a young man, the actual creation of it is fairly recent.”

The priest shares traits of other movie characters he has written, whether Robert De Niro’s vigilante Travis Bickle in Taxi Driver or Willem Dafoe’s drug dealer in Light Sleeper. “These young men having solitary lives, drifting out into the world - it all comes from Pickpocket, a film that had made an enormous impression on me when I was a critic,” Schrader said of the 1959 Robert Bresson film he still cites as one of his most important formative influences.

When he was in post-production, Schrader’s editor told him “there’s a lot of Taxi Driver in this movie.” Schrader acknowledges one direct homage to the earlier film - a shot of a character staring at a glass of Pepto-Bismol. (This echoes the scene of the camera zooming into a glass of alia-seltzer, which was itself inspired by a shot in a Jean-Luc Godard film).

The director lamented his generation’s failure to guard against war and environmental disaster (both topics touched on in First Reformed). “I’ve lived in the most privileged moment in the history of the planet, the baby boomer generation, a world of affluence, a world of leisure time, a world remarkably free of war and pestilence. And what did we do with this wonderful gift? We fucked it up for our children. That was our great gift to future generations.”

Schrader said that the film wasn’t directly intended as an attack on Trump, even if the current President represents much of which he deplores. “I remember that bleak morning, November 9th, after the election. I met with the producer from Killer Films. We were just stunned. We are from New York. We know this guy (Trump). We’ve known this guy for the last 30 years. We know exactly what is going to happen. But it didn’t change the script much. The only change was that it got a little more “Jihadist,”” Schrader said. The priest’s quotes from the bible started to veer more “toward the apocalyptic side…you know the moment a Christian starts quoting from the Book of Revelations, they’ve gone to the dark side. Nothing good is going to happen!”

Arclight has been handling international sales on First Reformed which was picked up for the US by A24 after Venice. Details of its release in the rest of the world are expected to be announced shortly. During his Rotterdam masterclass, Schrader is also expected to discuss Dark, his reworking of his 2014 feature Dying Of The Light which he wasn’t allowed to edit to his original wishes.