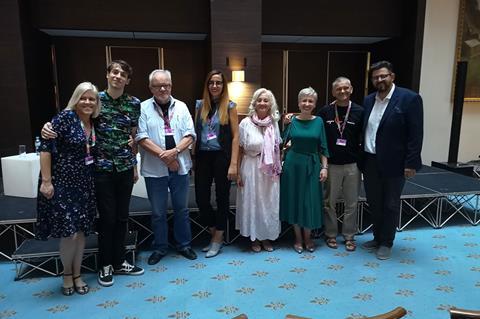 Organisers and participants at the 2019 Sarajevo True Stories Market

The fourth edition of Sarajevo Film Festival’s True Stories Market, which spotlights true stories from the region’s recent troubled history with a view to bringing them to wider audiences, saw one particularly personal story capture the audience’s attention.

Presenting her own story, Iva Radić recounted her early life in the city of Vukovar on the Croatian side of the border with Serbia, the setting for some of the bloodiest events of the Balkan Wars. Like many people from this region, she was the product of a mixed marriage - a Serbian mother and a Croatian father, who had a physical disability and did not fight in the war. When the war reached Vukovar, the Radić family fled to Serbia.

“Upon our return to Vukovar, soldiers of the Yugoslav Peoples’ Army stopped our car not far from the Velepromet storage facility, which had been converted into a make­shift prison camp,” said Radić. “They ordered my mother, my sister, my father who suffered from muscular dystrophy, and me out of the car, and took us to be interrogated. They separated my father from the rest of us, and took him way to be questioned. That was the last time we saw him. After ten days, they put my mother, my sister and me on a bus to Serbia.”

Those events took place in November of 1991, when Radić was eight years old.

She has spent the past 28 years searching for her father and she says she will not stop until he gets a proper burial. Playing a clip from the independent Serbian TV show TV Justice, the audience saw her talking to her former neighbours, including her father’s friend who is charged with rape and the family of a man who tried to rape her mother.

There were three further stories presented at the True Stories Market this year, which is held as part of Sarajevo CineLink’s Dealing With The Past strand.

Senija Jakupović of the Bosnian association Izvor, which works on missing persons and civilian victims of war, related the story of Selma Čengić, a nurse from the city of Prijedor who was 25 when the war broke out. She managed to escape to Germany with her parents, her husband, her brother, and her three-year-old son. Three years later, the war was still raging and the men in the group decided to return to their homeland to fight. She gave her child to her mother to take care of, and joined them.

As she was full of hatred towards Serbians, she was surprised to discover that there were both Serbian and Croatian men fighting on the side of the Bosnian Army, a fact that changed her mindset, she said. Today, she is in an ethnically mixed marriage, and is the mother of two boys. Čengić was present at the Sarajevo event.

Another subject present at the event was Husein Jakupović, also from Prijedor. His story was told by Mirna Buljugić of the Balkan Investigative Journalism Network. In August 1992, members of the Prijedor Police Intervention Squad executed more than two hundred civilians at Korićanske Stijene (the Korićani Cliffs) on Mount Vlašić in Central Bosnia. Only twelve people survived the massacre, including Jakupović who saved himself by jumping off the cliff before the bullets reached him. Only in July this year were the remains of more than one hundred victims finally laid to rest.

Fikret Bačić, whose story was told by Aleksandar Žolja of the NGO Helsinki Citizens’ Assembly Banja Luka, was fired from his job in 1991 when Yugoslavia was already falling apart, and went to Germany. After three years he learned that all 32 members of his extended family had been executed, including his wife, his mother, his children, and all his nieces and nephews. Six years later, he returned to Bosnia to start a new family, and to try find the bodies of his loved ones. He took part in the prosecution of those responsible for the crimes, and launched an initiative to erect a memorial to the 102 children murdered in Prijedor during the war, regardless of their ethnicity. To this day, he still has not managed to persuade the local authorities to approve the memorial, nor has he found the remains of his family.

Separately, the True Stories Market also presented a documentary project in development, based on a story from the 2017 edition of the market, Mamula All Inclusive. The story is about the transformation of the former concentration camp from the Second World War, Mamula in Montenegro, into a luxury resort. Directed by Aleksandar Reljić and produced by Dragan Gmizić for the Serbian company Greenfield Production, the project has received support from Film Centre Serbia and has a Croatian co-producer on board, Restart Production.