‘Petite Maman’ among trio to land on Berlin jury grid

Petite Maman, the latest film from Girlhood and Portrait Of A Lady On Fire director Céline Sciamma, has scored consistent marks on the Screen jury grid for an average of 2.6. 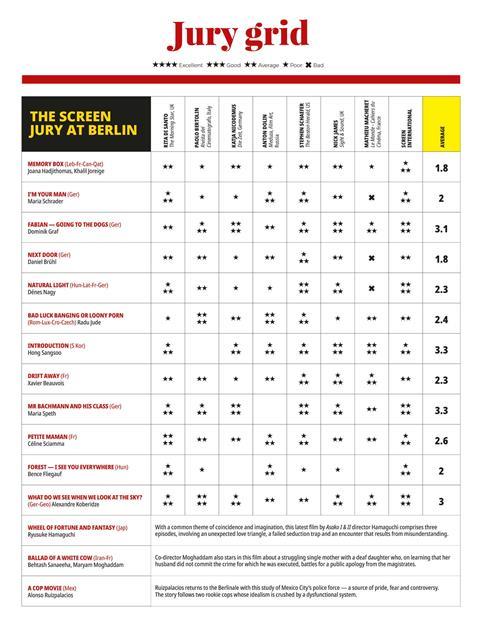 Petite Maman received no scores lower than a two (average), although that was its modal score with four critics making that choice.

It did receive one four (excellent) from The Morning Star’s Rita Di Santo; and currently sits in fifth place with three of the 15 films still to score.

Sciamma’s film centres on eight-year-old Nelly, who has just lost her grandmother and is helping clean out her mother’s childhood home, when she strikes up a relationship with a girl her own age who she meets in the woods.

Alexandre Koberidze’s German-Georgian co-production What Do We See When We Look At The Sky? produced a decent response from the grid critics, also with no scores below two and an average of 3.0.

A romantic tragicomedy with magical elements, the film centres on a young man and woman who meet on the street and fall in love; but after agreeing to hook up the next day, they wake up with completely changed appearances.

Bence Fliegauf’s Forest – I See You Everywhere was the third new title on the grid, taking a 2.0 average from the six scores it has received thus far.

The film is an experimental ensemble drama offering a visceral portrait of Hungarian society.

The final three films to land on the grid are Alonso Ruizpalacios’ A Cop Movie, Ryusuke Hamaguchi’s episodic Wheel Of Fortune And Fantasy, and Behtash Sanaeeha and Maryam Moghaddam’s single mother drama Ballad Of A White Cow.