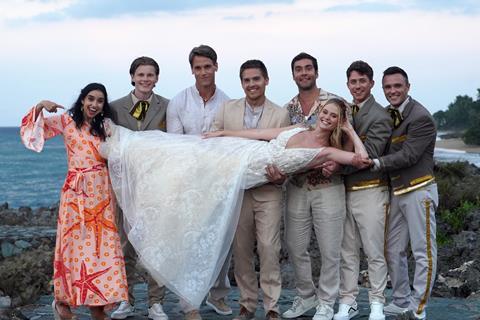 Production is underway in the Dominican Republic on Beautiful Wedding, the sequel to Beautiful Disaster with Roger Kumble reprising his director role and Voltage Pictures handling worldwide sales.

Dylan Sprouse (After We Collided), Virginia Gardner (Fall, Halloween), Austin North (Outer Banks), Libe Barer (Sneaky Pete) and Rob Estes (After series) star in the feature which is scheduled to open in international markets on April 5 2023 one week prior to the US release.

Picking up where Beautiful Disaster left off, Abby (Gardner) and Travis (Sprouse) wake up after a crazy night in Las Vegas to discover they are married and head to Mexico for a honeymoon with friends and family.

The Beautiful films are based on the novels of the same name by Jamie McGuire. Brian Pitt (After franchise), David Shojai and Kumble are among the producers. Kumble’s directing credits include Cruel Intentions and Voltage Pictures’ 2021 hit After We Collided.