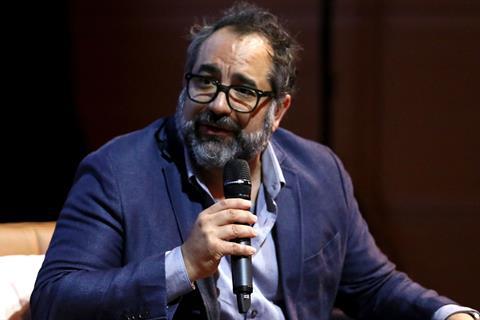 Leading Mexican production designer Eugenio Caballero touched down in Qatar to talk about his work on Pan’s Labyrinth, The Limits Of Control, The Impossible, A Monster Calls and ROMA for the Doha Film Institute’s Qumra event this weekend (March 15-20).

Caballero acknowledged production designers are rarely in the limelight - by comparison with other key crew such as cinematographers and costume designers - and joked this was one of the perks of the job.

However he was keen to promote and explain the role of the production designer to emerging talents in the cinema profession.

“The classic definition could be that the production designer takes care of the things you can touch, the props, the sets, the walls, the colour palette that you apply to a wall or to an object and then on the other side, the non-touchable things such as the light, the frame or the colour-width, that’s down to the cinematographer.”

“But that’s too technical for me. I see production design as being about creating a world that works specifically for each film. Even if a film is super-realistic, the minute you choose bits of that reality, you need to give a coherence and follow certain rules,” he said.

Caballero was talking fresh from the awards season run of Alfonso Cuarón’s ROMA, for which he designed the reconstructions of Mexico City and the director’s childhood home of the early 1970s. Caballero conceived the look of the film on the basis of long discussions with Cuarón who never gave him the script and occasionally planted false clues and indications as to how and where the shoot would actually take place.

“It’s the film on which I had the longest pre-production conversations with the director,” he said.

Caballero, who won an Oscar (with Pilar Revuleta) for his work with Guillermo del Toro on Pan’s Labyrinth  in 2006, said everything a production designer used on a set, from the props to the colours, shapes and textures could contribute to the overall narrative.

“You can explain a lot of things that it would be difficult to tell with words in the script,” he continued.

Applying this to his work with del Toro on the Spanish Civil War-set Pan’s Labyrinth, Caballero talked about how they differentiated the real and fantasy worlds of the young heroine – comprising the army-occupied country house and labyrinth – with the use of shapes.

“For the reality, we wanted a lot of straight lines, a lot of angles, things that were oversized. We made a lot of furniture to make the girl look small all the time. The fantasy part is supposed to be the scary part but it’s not, it’s the warmest part, you have no angles, you have a lot of shapes that somehow embrace the characters, a lot of curves.”

Caballero noted while that 2006 production used very little CGI technology, he had since come to embrace digital technology in later productions where it made sense such as J.A. Bayona’s tsunami drama The Impossible (2012) and Bayona’s A Monster Calls (2016). He combined physical scaled miniature sets with real-size constructed sets and special effects.

The production designer also discussed the special attention he pays to the colour palette of a film to support the narrative. On The Impossible, for example, he explained how the palette in the early scenes, depicting the idyllic family holiday ahead of the tsunami, is bright and saturated, but then turns grey and beige when tragedy strikes, with hints of colour returning in the final scenes.

It was a device Caballero had previously used in Jim Jarmusch’s 2009 drama The Limits Of Control, in which Isaach De Bankolé starred as a mysterious lone assassin on a mission. He used colour as “a metaphor” for the protagonist’s journey, with the palette transitioning from saturated colours to grey and whites as he got closer to the moment of accomplishing his mission.

“It’s like he is becoming a ghost. When he performs what he has to do, it is the whitest moment and then the colour returns,” Caballero explained.

Working this way was not an option on ROMA, which was shot on digital and in black-and-white. Instead, Caballero and Cuarón instead spent a long time experimenting with the colours of the objects on the sets, to achieve different hues of white, grey and black.

“We ended up using a really pink couch to get a specific type of grey we wanted. It was the same case with the cars, we had to experiment with colours to see how they would translate,” he explained.

One of the biggest challenges for Caballero was reconstructing the early 1970s streets of Mexico City, much of which was destroyed by the deadly earthquake of September 1985.

“It really changed the city landscape,” said Caballero. “I’ve been thinking about why I do a lot of films about destruction. Perhaps it has to do with that. It’s that earthquake mentality. The earthquake happened when I was 13 years old so as I was growing up there were always one or two ruins on every street… that earthquake changed the face of Mexico.”

Caballero ended up constructing a street scene on a piece on a vacant industrial lot to achieve the right look.

Now that awards season is over, the production designer – who says an important component of his process is having the time to think – is mulling three potential project offers.

He is also putting the final touches to an exhibition celebrating del Toro, which will open in the director’s home town of Guadalajara at the end of May.

Caballero, who is curating and designed the exhibition, says it will combine works from del Toro’s extensive art collection with artefacts – such as props, costumes and concept art – from his films, with famous works of art by other Mexican artists.

“It’s about Guillermo del Toro as a collector as well as a creator.  The idea is to put works from his collection as well as items from his films into a dialogue with Mexican art. I’ve got pieces from all the major museums in Mexico and I’m blending all three columns. I’m going to be tied up with that for at least another two months.”