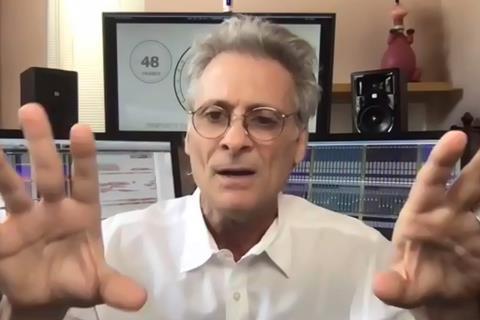 The Oscar-winning US sound designer Mark Mangini, whose credits include Mad Max: Fury Road, Aladdin, Gremlins, Blade Runner 2049 and Dune, has called for sound to be included in a film’s production from script stage.

While sound has traditionally been relegated to post-production, he told an online audience at the Doha Film Institute’s Qumra event why he advocates a more inclusive approach throughout all stages of production.

“Sound can be used as a very efficient storytelling tool,” said the Los Angeles-based filmmaker. “Sometimes you want to hear something rather than hear somebody tell you about it.”

He revealed filmmakers including Gavin O’Connor on The Way Back and Denis Villeneuve had consulted him during the writing process to offer advice and provide sonic solutions to storytelling problems.

“There are occasions when the filmmakers call me while they are in the writers’ room and say, ‘I have this narrative challenge, this roadblock, can sound help me get past it in a more elegant way?’,” he explained.

“I’m working with Denis on the new Dune. And, as on Blade Runner, he contacted me as the script was being finished. One of the topics that came up was the language of the Fremen, the desert people. I asked him, How were they going to speak? And he said, ‘Well, I hadn’t really thought about it.’”

Mangini suggested bringing in linguist David Peterson, who worked on HBO’s Game Of Thrones, to design the Fremen’s language in advance.

“The actors can speak it on camera rather than having us try to fit it into their mouths in post-production. That’s one example of being involved at script stage and being proactive in the way the filmmaker’s going to capture the film.”

Mangini said the ability to think “musically, laterally, melodically, rhythmically” was invaluable for anyone interested in a career in sound design, along with “a critical ear” and “the ability to hear”.

“Listen to the world”

“When I’m asked by students, what advice I would give them, one of the first things I say is, ‘You need to go and listen to the world. You need to go listen to it and develop your sense of hearing, bring that knowledge back and then begin applying how you hear the world to how you design and create soundtracks’.”

Mangini also touched on his collaboration with Villeneuve on Blade Runner 2049, for which the director asked him to “compose with sound”.

“What he meant by that was, he wanted to erase the boundaries between music and sound design, so we spent a great deal of time designing or composing sounds that you might not recognise as sounds, but which you might not be sure were music.”

Related to that experience, Mangini said he believed that the relationship between the sound designer and composer is one of the most crucial on a feature and that their work should seek to complement each other rather than compete.

“There’s only one soundtrack and we have to share it.”

Mangini also talked about how sound can be used to subconsciously tell an audience something about a character.

He gave the example of a scene in Blade Runner 2049 in which Dave Bautista’s heavy-set character Sapper Morton enters a room. To illustrate his size and weight, Mangini added in the sound of floorboards creaking underfoot, together with the rattle of glasses and crockery from across the room.

“This is the kind of subliminal power that sound has to give a little piece of story that you could never tell with words.”

Mangini likened his role to that of a chef, adding that like a chef, sound designers need the “freshest and newest ingredients”. Gathering these involved recording everything from tigers to electric drills to grains of dirt to scrap metal being moved around a junkyard by digger to amass a library of raw sounds. He noted how for another scene in Blade Runner, in which grubs are boiling away in a pan, he dug out a 40-year-old clip of his mother’s pasta sauce bubbling on the stove and used that.

Mangini has been working in sound for 45-years. He started out as a guitarist before he got his first break in sound working for Hanna-Barbera Productions, the makers of The Flintstones and Scooby-Doo. From there, he moved into film and now has nearly 150 credits to his name. He has been nominated in the Academy Awards sound editing category five times and in 2016 clinched the Oscar for his work on George Miller’s Mad Max: Fury Road.

Mangini recalled how he moved to Sydney to work on the film for five weeks and ended up staying seven months, completely rebuilding the film’s sound. It was such an important component of the film for Miller that he had created a dedicated second unit sound crew who spent four weeks recording all the vehicle sounds.

“When I arrived there was literally too much sound and the mixers were overwhelmed and didn’t know where to begin. The first part of my job was the sound equivalent of listening to the rushes,” said Mangini.

“I listened to thousands and thousands of hours of audio to determine what worked, and what didn’t, to wean it down to a limited palette we could manage and present to George.” Miller’s philosophy, he revealed, is a “top of the pyramid approach” to sound and vision. “In any given shot or scene, your focus should be on one thing visually and one thing sonically. My job was to find the sonic focus of every scene.”

Mangini revealed that for the past four years he has been working on the documentary Season 20 about the late basketball Kobe Bryant. Spearheaded by Bryant prior to his death in a helicopter crash in 2020, it focuses on the basketball player’s 20th and final NBA season with Los Angeles Lakers in 2015-2016

“It is a verité look at his last season. And one of the things Kobe wanted was to make sure this film felt like it was the truth,” said Mangini. “I realised there’s something untruthful about most documentaries because they are captured with monoaural sound and we hear the world in 360 degrees. I said to him, if you really want to commit to this, we need to capture your film in surround sound. And that is exactly what we did,” he continued.

“In some of the basketball scenes, we have 75 channels of sync audio. Not only did we place surround sound microphones in all the arenas when he was playing, but captured everything in a multi-channel way that will be presented in a true Dolby Atmos format when the film comes out.”

Mangini is one of five Masters participating in this year’s edition of the DFI’s Qumra talent and project incubator, running March 12 to 17, alongside filmmakers Claire Denis, James Gray and Jessica Hausner and cinematographer Phedon Papamichael.