Multi-platform project was presented at the Power to the Pixel Finance Forum. 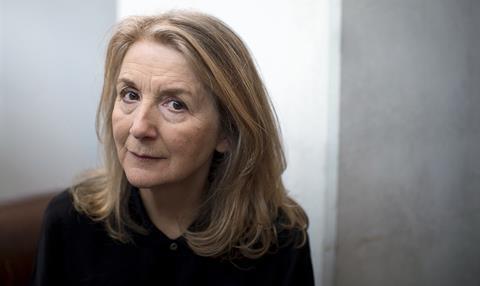 British director Sally Potter has unveiled plans for a multi-platform reboot of the Cold War song cycle Oh Moscow, which she co-wrote with experimental musician Lindsay Cooper in 1987.

The ambitious project will feature a concert tour, a feature-length montage of archive images from the Cold War overlaid with the music and an interactive platform, linking past humanitarian crises with the consequences of contemporary conflicts.

The director and her long-time producer Christopher Sheppard, who collaborate under the Adventure Pictures banner, presented the project at the Power to the Pixel Finance Forum on Wednesday (Oct 14).

Potter and Cooper co-created the original work in response to the Cold War and the impact that it was having on ordinary people.

“We set out to write a song cycle which would evoke through its layering of sounds, words, melodies and harmonies a map of longing for a world without borders and one that might learn from its mistakes and avoid the repetitive catastrophes of war,” Potter told the forum.

From 1987 to the fall of the Berlin Wall in 1989, the cycle was performed across the world, including in Moscow and East and West Berlin.

Adventure Pictures has already worked on a number of innovative digital projects including Potter’s 2009 Rage, the first feature to premiere simultaneously in cinema theatres and on mobile phones, and the interactive Sally Potter archive.

Sheppard said that the current project, though, marked the first time the company had attempted to pull off something of this scale on a multi-platform basis in which it had to chase linear and digital funding at the same time.

“There isn’t a book out there explaining how we can make an online manifestation of the piece,” he said. “There would be different layers in the online piece that you would not find in the cinema or TV piece. We’re here to figure out how an auteur like Sally can come into the digital space and what it means to create a transmedia work.”

Potter said the decision to revive the work had been prompted by a trio of memorial concerts for Cooper, who passed away in 2013.

As well as prompting invitations from jazz festivals around the world, the concerts had also made Potter reflect on how its themes of separation, loss and exile had gained new resonance today amid the ongoing refugee crisis in Europe.

The digital component, she said, was in the early stages of development but might include, for example, a split-screen element enabling users to view old and contemporary footage simultaneously.

“Oh Moscow is grounded in the notion that unless we understand our history we’re bound to repeat it,” she said. “Do we now have the means using digital technology to link music that animates one part of our brain with knowledge that animates another?”

“Can digital layering allow each individual to become an information archaeologist, digging deep to collect essential information from the past to the make the links between the people in the 20th century who stumbled across Europe in their hundreds of thousands, driven from their homes by war and persecution, with those we are now watching every day on our smart phones and TVs?”

Oh Moscow was among eight interactive projects presented at the Power to the Pixel Finance Forum on Wednesday and competing for the €4,000 Arte International Prize for the Pixel Market.

The winner will be announced later today (Oct 15).