Montreal’s genre film festival wraps with over 100,000 spectators attending across its 23 days of screenings. 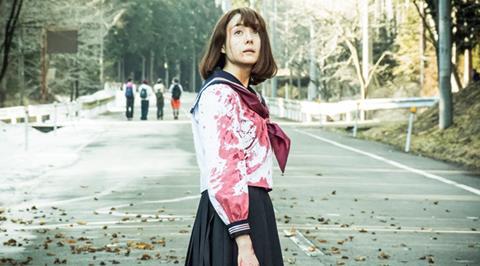 Sion Sono’s Tag was among the winners at this year’s Fantasia International Film Festival, which wrapped yesterday [Aug 4] with the Canadian premiere of Shinji Higuchi’s Attack on Titan.

This year saw over 100,000 spectators attending across the festival’s 23 days of screenings, including 195 indoor screenings, three outdoor screenings, eight virtual reality films and other special events, such as the debut international performance of Glass Eye Pix’s live horror radio show Tales from Beyond the Pale.

“We’re all absolutely thrilled with how the festival went. A good number of our world premiere discovery titles are now in discussion for acquisition. Most importantly, just about every film, down to the most so-called ‘difficult’ works, managed to find their audience and get proper recognition,” Mitch Davis, co-festival director, told ScreenDaily.

“Even after all these years, we’re still amazed by how terrific our audience is, in terms of bravery, open-mindedness and passion. It’s especially rewarding to see the brilliant, largely unknown indie debuts blow-up here. Every year, a good number of filmmakers tell us that their screening here was one of the greatest nights of their lives, and it makes me happier than words can articulate whenever I hear that,” added Davis.

“At a time when many in the industry are prematurely bemoaning the death of theatrical exhibition as sands shift increasingly towards VOD, it’s especially exciting to see huge, enthusiastic audiences continue to come out in support of individualistic filmmaking.”

Tag won two of the festival’s Cheval Noir awards for Best Film and Best Actress for Reina Triendl, as well as a special mention for its “creative, surprising, and monumental opening kill sequence”.

Keiichi Hara’s Miss Hokusai scooped the Satoshi Kon Award for Best Animated Feature Film with a special mention going to Sam’s Possessed, while the inaugural Barry Convex Award for Best Canadian Feature or Co-Production was won by Larry Kent’s She Who Must Burn, carrying a $1,000 prize courtesy of The Paul A. Ray Memorial Fund.

As well as the live performance from Jon-Mikl Thor and Steve Price following I Am Thor and the ‘Intro to Wakaliwood’ night, it was two screenings with Fantasia ties that were among the highlights for co-festival director Davis.

“The Turbo Kid screening was likely the single craziest screening in our history, and also one of the most sweetly touching ones. We absolutely adore RKSS, they’ve been coming here since they were teens with fake IDs, and the audience loves them as much as we do. In so many ways, it was a heroic homecoming celebration, exploding with loving standing ovations and cheers,” enthused Davis.

“On a related note, there was bottomless love in the room for long-time Fantasia friends Ted Geoghegan and Karim Hussain at the We Are Still Here screening, which was just a great vibe to take in.”

Davis also described the Tales from Beyond the Pale performance as “pure joy”, adding that Fantasia is always open to “mounting unconventional performance and expanded cinema events”.

The 19th edition of Fantasia International Film Festival was supported by 30 sponsor partners, ten media partners and over 125 advertisers. Its 20th edition will take place from July 14-Aug 2, 2016.