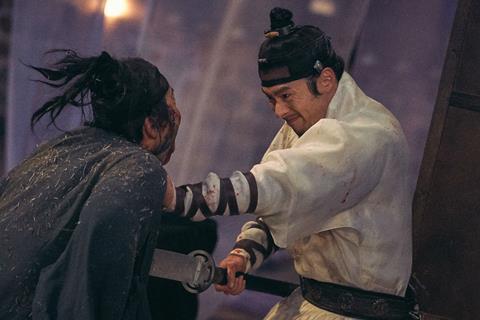 South Korean sales outfit Contents Panda has sold sword-fighting zombie film Rampant to multiple territories with a string of releases planned to start day-and-date with Korea on October 25 in Indonesia, Malaysia and Brunei (Clover Films) as well as the Philippines (Rafaella Films).

Director Kim Sung-hoon’s film is backed and distributed locally by Contents Panda’s parent company Next Entertainment World (NEW), which was behind zombie hit Train To Busan.

Rampant stars Hyun Bin and Jang Dong-gun and is set in the Joseon dynasty when Prince Ganglim, a martial arts expert returning from captivity in Qing has to fight murderous creatures known as Night Demons to save his nation.

Rampant will also be released October 26 in Taiwan (Movie Cloud). This will be followed by a November 1 release in Oceania (Cine Asia), Thailand (Sahamongkolfilm), Myanmar (Colorful Garden), Singapore, Hong Kong and Macau (Clover Films) and North America (Well Go USA) - the last of which was previously announced.

The film will go on to open November 2 in the UK (Purple Plan), Vietnam (Purple Plan) and Germany (Splendid Film) as well as November 8 in Cambodia (Westec Media), with in-flight (Emphasis) to start December 3.