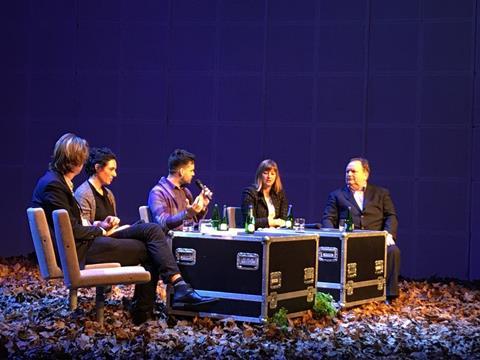 “While it’s great for consumers who have access to more free content, it’s very bad for the industry,” said Franklin. “Many local papers have gone out of business, journalists have lots their jobs and original content has been drastically reduced.

“I think this needs to be looked at when addressing films in the digital market.”

Ariane Buhl, Gaumont’s digital sales manager, agreed. Referencing the proposed Digital Single Market, she said: “If you are not doing this local work with films and everything is everywhere, the only films that will perform are the big titles.

“The smaller films that need more local promotion will struggle to survive. And these are the types of films we all want to champion.”

“I think we need to remember the European Commission invests in a lot of European films,” said Wolfson. “They want to help. Instead of being defensive, we should to be more constructive in coming up with alternative solutions.”

Christine Eloy, MD of Europa Distribution, cited the loss of a reliable DVD market as a reason to be concerned.

“Because we don’t have the safety net we had 15 years ago [with the DVD market], the only place we can recoup investment is theatre and VOD sales,” said Eloy.

“This is why it is important we have exclusivity. If we lose the ability to recoup the costs for the work we have done, then we are in a sense working for free.”

Gaumont’s Buhl asserted that is it not a question of ignoring VOD platforms, the point is instead how the public will discover the product that is there.

“The struggle is to create an appetite for existing content on these platforms. That is most effectively done locally,” said Bloye.

“Look at Netflix, what products do they promote? They are putting money into promoting their own exclusive content. Exclusivity is the life blood.”

The platform’s influence on the European market came into question.

“We have to remember Netflix is a subscription operation. They are not going to absorb everything” said Bloye.

“They say they are a curated service but that simply means they want to buy films at earlier stages as well as focus on producing their own content.”

The issue of local vs global content was also raised, addressing the opportunity for other platforms to get involved.

Eloy said: “Why should we have one global player when it’s the local players that know their audience? There are many out there  - it’s still evolving.”

While Buhl recalled Netflix’s more recent involvement with local content, Bloye cited the lack of statistics as a major issue for filmmakers and sales agents who strategically want to formulate a distribution plan.

“We need the statistics. Why is there nothing for VOD?,” he said. “If you look back why we historically started releasing box office statistics - it was so cinemas would stop adjusting the figures.

“We are in a situation now where these players are under scrutiny for their tax arrangements.

“I think there is every reason for public policy makers and filmmakers to know who is watching what online.”

Wolfson highlighted five films that premiered at last year’s IFFR whose world premieres coincided with simultaneous screenings across 40 different European sites as one way of reaching out to new audiences.

A live Q&A followed where audience members asked questions via Twitter and a video connection.

“I think, in general, festivals can play an important role in finding these audiences. I had been thinking about ways to transplant the idea of a festival beyond the festival itself.

He also referenced the electronic music festival Sonar where he worked together with the festival in bringing together new younger audiences with different VOD platforms.

“Sonar Festival is interesting because it brings together a completely different demographic - younger people interested in technology and dance music. They are a future audience for VOD platforms. I am sure we will see more of these kinds of alliances.”

Buhl discussed UniFrance’s MyFrenchFilmFestival that is organised in collaboration with 20-30 VOD platforms where the films are without a distributor.

“We are working with UniFrance a lot on this. They are working hard to put these films in front of the public eye. It’s a great initiative.”

Eloy added that the public goes to certain local cinemas because they screen the films they know they like. So a VOD platform should operate in the same way - it’s just a matter of finding better ways to promote the content to the public.

In countries such as Lithuania or Romania - where a lack of cinemas makes platform releases difficult - piracy is a key problem.

“Either the countries only have large multiplexes which don’t support independent film or there are not many cinemas in general,” said Buhl.

“This makes our job even harder to promote alternative film titles. If there was a strong VOD platform that could target these territories - that would help tackle piracy and bring our product into more challenging local markets.”