Despite a crackdown on local media outlets, the Turkish film industry remains united in the face of ongoing turbulence. 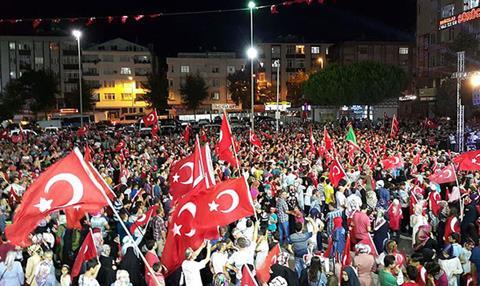 The Turkish industry has largely stood firm in solidarity against the attempted military coup d’etat on July 15, which resulted in hundreds of deaths and thousands of arrests and suspensions.

Haunting memories of persecution towards film-makers and heavy censorship during past juntas (1960, 1971, 1980) have united industry against the threat of military overthrow, despite ideological differences with the current regime.

All film associations publicly condemned the putsch and the violence while many film-makers and celebrities denounced the plotters on social media accounts.

The Alliance of Collecting Societies in Audiovisual Field made the following declaration: “We know that a coup d’etat, regardless of its reason, means restriction or abolishment of liberties. We are against the coup d’etat and every kind of anti-democratic action and violence. We are aware of the value of the democracy, human rights, free press and free art. We wish all the factions of the society to become aware of these values”.

The attention is now slowly beginning to turn to the future of the film industry.

The recent state of emergency has brought with it the closure of a number of media outlets and gives the state the power to close cinemas.

However, Golden Bear-winning director Semih Kaplanoğlu (Honey) is confident that Turkish film-makers will be able to continue with their work: “I have been among an impressively diverse range of civilians representing every opinion and class in the streets and squares of the city. This resistance, led especially by women, is full of incredible stories and testimonies for us film-makers.

“In the last decade, hundreds of feature films, documentaries and short films reflecting the ethnic and cultural diversity of Turkey were subsidised by the government. Those films won awards and were praised at international film festivals. Likewise, Turkish television series have been watched all around the world.”

“The reaction of a society that wouldn’t yield gives us a big opportunity to mature our democracy. I believe that we, the film-makers, will resist the limitations of the state of emergency and continue to work.”

Producer and Antalya IFF director Elif Dagdeviren agrees that film production will not be affected: “Most of the film productions which had already started will keep going. But productions that did not secure finances before the coup could have a hard time [due to economic uncertainty]. In the long term, I think this whole period will bear some very impressive films”.

Dagdeviren confirmed that the 53rd Antalya IFF will be take place October 16-23 as planned. No changes are foreseen for upcoming international festivals in Adana (19-26 September), in Istanbul (Filmekimi 7-16 October) and in Malatya (4-10 November).

Deniz Yavuz, owner of box office website Antraktsinema, described the impact of recent events on box office: “There was no significant effect on the box office. The coup d’etat was attempted on a Friday when new films are released. Due to its fast suppression, the public largely continued with daily life as best they could meaning no significant differences were recorded regarding admissions.”

However, box office did see an inevitable dip on the weekend of the coup and ongoing political instability is having a longer-term impact.

“A loss of 10 million admissions was estimated for 2016 in relation to the general political tension in the country, regional events of terrorism and local problems prior to the putsch”.