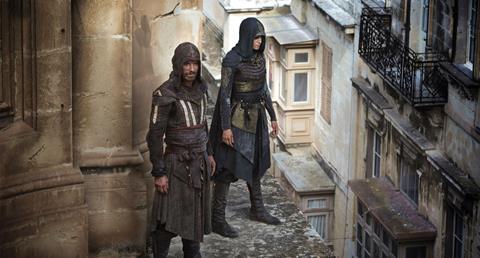 Thanks to its New Year’s Day opening, Assassin’s Creed has landed top of the UK box office on debut.

Assassin’s Creed will soon overtake Warcraft: The Beginning’s $7.3m (£6m) result and, though not a direct comparison, it will hope to surpass The Angry Birds Movie’s $12.1m (£10m) haul.

Rogue One: A Star Wars Story might have officially been dethroned, but it led the Fri-Sun weekend for a fourth straight week.

A Monster Calls landed third on its UK bow thanks to its New Year’s Day opening.

The last of the New Year’s Day openers, Silence arrived in fourth with a decent UK debut.

In terms of Martin Scorsese’s outings at the UK box office, Silence ranks as his fifth-best overall, although its Fri-Sun tally drops it behind The Aviator and Hugo.

From its nine sites through Curzon Artificial Eye, Endless Poetry recorded a UK bow of $24,000 (£19,401), including previews.