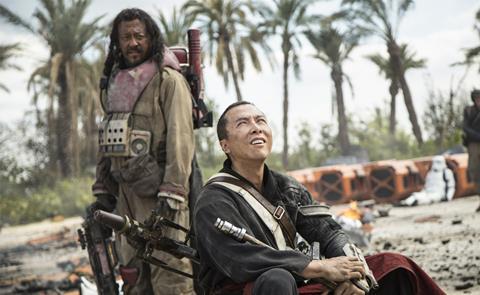 Scroll down for top ten films/distributors

The UK box office broke its all-time record for the second consecutive year in 2016.

While last year was propelled by the mighty double-bill of Star Wars: The Force Awakens and Spectre, this year was led by a broader range of titles. In 2015, the top five films accounted for 26% of ticket sales, whereas last year, they contributed 18.5% and 12 films grossed over £30m, compared to eight in 2015. Overall, 899 films and events were released in cinemas at an average of 17 per week.

“Appealing to a wide range of audience sectors rather than relying on a small number of record-breaking titles was the factor that made 2016 a success,” commented Lucy Jones, executive director at comScore.

“Many people who hadn’t been to the cinema for a while made their first trip in 2015 to see Star Wars or Bond, and that reminded them how enjoyable cinema can be. New innovations in cinemas - such as bigger screens, VIP seating and boutique experiences in ambience and food & drinks - complemented the wide range of films released this year, and brought people back again.”

comScore anticipates there will be more than 900 releases in 2017, including around 100 event cinema shows.

In terms of the top ten films of 2016, Universal’s The Secret Life Of Pets was the only original title. Seven of the top ten were sequels, prequels or spin-offs, with one other based on a comic book (Fox’s Deadpool) and one a reboot (Disney’s The Jungle Book).

The result means that eOne UK has crossed the £100m mark twice in the past decade and marks their biggest-ever year. Its leading title was Steven Spielberg’s The BFG which marched to $37.9m (£30.76m), providing 27.99% of the distributor’s overall 2016 haul.