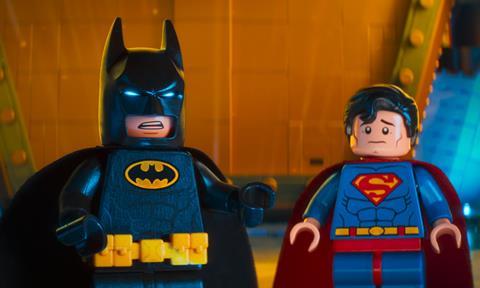 Thanks to last weekend’s previews, The Lego Batman Movie has landed top of the UK box office.

With school holidays this week, The Lego Batman Movie should have a prosperous first week despite competition from Sing, but its holdover will give an indication if it can come close to its predecessor’s total.

Fifty Shades Darker might have missed out on the official top spot, but did lead the market across Fri-Sun.

The opening marks the second-biggest debut for an 18-rated film of all time at the UK box office and while it won’t match its predecessor’s $43.9m (£35.1m), Darker’s decent start gives it a shot at £20m.

Lionsgate’s musical has now danced to a dazzling $33.1m (£26.49m) and will hope that continued awards recognition can push it past £30m.

Entertainment’s drama has now grossed a sturdy $8.06m (£6.43m) and with Dev Patel’s surprise Bafta win, it could even get a timely awards lift over the coming week.

Altitude’s Moonlight receives a wide release, while Curzon Artificial Eye’s Lost In France and Park Circus’ re-release of Multiple Maniacs are among the films receiving a limited release.