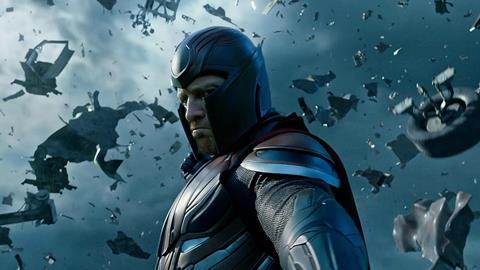 X-Men: Apocalypse has become the first non-Disney number one in more than a month at the UK box office.

Relatively soft critical response could prevent it from challenging Days Of Future Past’s $39.4m (£27.1m) result, but Apocalypse will hope to surpass X2’s $30m (£20.66m) to end its run as the third biggest X-Men outing.

The Angry Birds Movie remained in second after an excellent drop of only 7% in its second weekend.

Alice Through The Looking Glass could affect it from this Friday [May 27], but The Angry Birds Movie should prosper over the upcoming school holiday.

As expected Disney’s live-action adaptation has now swung past £40m and is up to a stunning $60m (£41.3m), with £45m still likely as long as the arrival of stablemate Alice doesn’t hurt it too much.

Also for Disney, Captain America: Civil War fell a better-than-expected 53% with the arrival of X-Men: Apocalypse.

Bad Neighbours 2 rounded off this week’s top five with a decent drop of around 30% in its third weekend.

Universal’s comedy sequel partied to an extra $1.1m (£766,279) for $7.3m (£5.06m) to date. It could still match the £7m+ results of director Nicholas Stoller’s previous efforts, Forgetting Sarah Marshall and Get Him To The Greek.

That marks one of director Tom Tykwer’s lowest-ever UK debuts despite being one of his widest releases, but there’s a chance that the appeal of Tom Hanks can draw in sturdier midweek numbers.

Also for Curzon Artificial Eye, the re-release of Ivan’s Childhood recorded a UK debut of $15,000 (£10,283), including previews, from its nine sites.

Curzon Artificial Eye’s Love And Friendship receives a wide release, while eOne’s Bobby, Metrodome’s The Daughter and Studiocanal’s Mon Roi are among the films receiving a limited release.

Lionsgate’s Minuscule: Valley Of The Ants receives an exclusive release at Vue.

Bank Holiday Monday [May 30] sees the saturation releases of Universal’s Warcraft: The Beginning and Paramount’s Teenage Mutant Ninja Turtles: Out Of The Shadows.