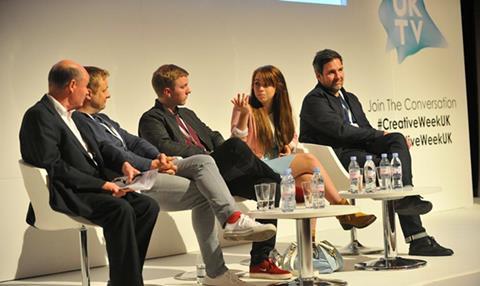 On the same day YouTube starKian Lawley was cast alongside Bella Thorne (Blended) in AwesomenessTV’s US Black List feature Shovel Buddies, an industry audience at MBI’s Creative Week conference in London heard about the potential for online talent to cross over into film and TV.

“That development is well underway already,” he explained. “There has already been a number of movies released in the states. I know Maker Studios will be prolific in that space. It will be very exciting to see content developed by talent as producers for cinema and TV. We’ve already got a number of things in development.”

Sugg has more than 7 million Youtube subscribers and her blog Zoella has received more than 140 million total visits.

Also on the panel yesterday was vlogger Bethan Leadley who was recently cast in micro-budget film Hungerford II alongside a host of Youtube stars including comedian/product reviewer Stuart Ashen, who boasts 800,000 Youtube subscribers and 177,000,000 Youtube views.

In the US, online star Grace Helbig, who also made the leap into feature films in indie comedy Camp Takota, boasts more than 2 million Youtube subscribers.

“Short form digital is as different as TV is to film or print is to radio so it doesn’t always work. Talent shouldn’t do something just because they can. Pewdie Pie, for example, has done South Park but that’s all he has been up for so far.”

At least one recent report suggests that youth audiences are likely to stick with their favourite vloggers as they both get older, which could be a positive sign for industry weighing up the potential for crossover talent to connect with ready-made audiences consistently across different platforms.

While its early days for the crossover of digital and social talent to longer formats, the push is underway.

It was certainly telling that on a day that included a number of heavyweight keynotes and enticing panels, it was the day’s last session ‘Generation Disruption’ that generated the most audience questions and buzz.