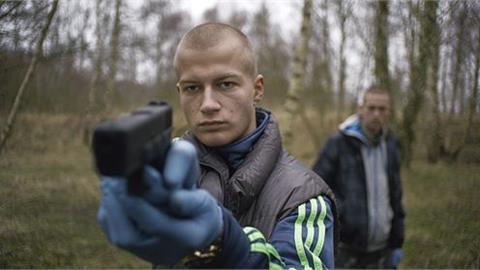 A tough, absorbing and watchable crime drama set against the backdrop of the impoverished multi-ethnic Copenhagen suburb of Nordvest, Michael Noer’s new film will hardly be sailing on the wave of love for all things Nordic Noir, but it marks him out as a talent to keep on watching. The film is peopled by complex and convincing characters, with lead actor Gustav Dyekjær Giese remarkable as a young man caught in a cycle of crime despite having a hidden compassionate nature.

Noer’s first film was the acclaimed 2010 prison drama R (that he co-directed with Tobias Lindholm), and while Northwest (Nordvest) shares some of that film’s fascination with young men and violence, it is also a convincing crime drama that never relishes the violence that is only ever a heart-beat away but instead simply notes how hard it is to escape ones surroundings.

Though its story and structure is familiar in tone and content to other crime films, Northwest is no slick, amoral gangster story, and though there is plenty of violence the nastier stuff is implied or off-camera rather than in full and bloody detail.

Eighteen year-old Caspar (Gustav Dyekjær Giese) is a burglar whose stolen items are sold by tough immigrant traders who claim to run his suburb. Caspar is trying to protect his slightly younger brother as well as provide for his mother and little sister, and sees the chance of a bigger pay day when he is approached by tough older gangster Björn (the impressive Roland Møller) to steal a few specific items.

He finds himself drawn to Björn and his operation, slightly away from his own neighbourhood, and soon gets work driving prostitutes to their ‘dates’ and handling selling drugs. He also draws his younger brother into the gang, with Björn almost a surrogate father to the pair, despite his clear penchant for violence and control. Making big money for the first time Caspar pampers his family and takes his girlfriend and other friends out for an expensive meal, but makes mistake of annoying the immigrant gang who assume he is ‘their’ man.

An attack Björn’s house sees Björn decide that it is up to Caspar to sort out the situation, and presenting him with a gun tells him it is his job to kill the rival gang leader. Faced with his life – and those of his brother and by extension their family – spiralling out of control Caspar is faced with some tough decisions.

Noer co-wrote the script with Rasmus Heisterberg, who wrote the Oscar-nominated A Royal Affair, and when casting turned to two non-professional actors who are real-life brothers in the leads, Gustav Dyekjær Giese and Oscar Dyekjær Giese. There a real sense of tenderness between the brothers which works very well, though the relationship between Caspar and Björn is perhaps the most intense and profound.

Shooting Dogme style using digital, Noer films in an appropriately gritty and intense style, never resorting to any picture postcard shots of Copenhagen, but drawing out the sense of community in Nordvest (whether it be good or bad) and layering in moments of humour (such as when Caspar and his friend Robin bond with a small dog while stealing from an opulent house) in amidst the tough backdrop. The success of R should see distributors keen to view Northwest, which is also a film likely to feature prominently on the festival circuit.