Not In Tel Aviv 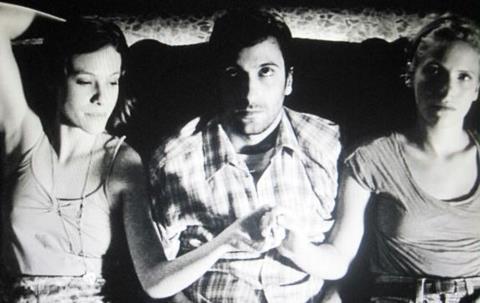 A series of deadpan jokes strung together by a non-existent plot, this low-budget attempt at a tribute to Bande a part, evolving around a character who seems bent on copying Vincent Gallo at his most mannered, may amuse the director’s intimate circle of friends, many of whom contributed personally to this production, but will leave the rest of the audience befuddled, wondering what it is all about and why. A possible festival item for selectors willing to go as far on the limb as Locarno did.

Accompanied by an insistent, but not terribly original, rock soundtrack.

Shot in digital black-and-white, with the director casting himself in the lead part, the film is supposed to follow the vagaries of a repressed high school teacher Micha, kicked out of his job for unspecified reasons in the opening sequence, who proceeds to kidnap one of his students, Anna (Yaara Peltzig) at gunpoint, though she does not seem to need any enticements to follow him.

He takes her home but doesn’t have sex on his mind because he won’t let her touch him, instead  has her accompany him when he goes to visit his sick mother who begs him to kill her, which he instantly obliges without too many hesitations.

Then he climbs back into his car with his compliant kidnappee and asks her to persuade a young woman, Nony (Roni Aboulafia) working at a pizza joint, on whom he had a crush for years, to come along with them. The mission turns out to be a failure, but the pizza girl jumps into the adventure nevertheless and the rambling ménage-a-trois embarks on anything from playing basketball to sharing the same bed together at night. Nony almost has to rape Micha to have sex with him… Anna watches them, feels left out and wants to leave so Nony attempts to engage her in a lesbian clinch to change her mind, but to no avail.

The cops who were supposed to chase the teacher and retrieve his victim finally show up. Micha goes to jail and is bailed out by Nony’s brother, who, in an inside joke which will be incomprehensible outside Israel, is called Ofer Shechter (the name of a popular male TV heartthrob) but is played by another, equally popular TV star, this time a comedian called Tal Friedman.

Accompanied by an insistent, but not terribly original, rock soundtrack, these loosely tied sequences of rarely entertaining events looks even more unlikely, because both Roni Aboulafia and Yaara Peltzig seem to be not only pretty (Ziv Bercovich’s camera deserves full credit for that) but also sensible enough not to fall prey to Micha’s nonexistent charm. Like many other things in this film, Geffen’s decision to play the lead role like this will remain unfathomable, possibly another inside joke that he did not choose to share with his viewers.