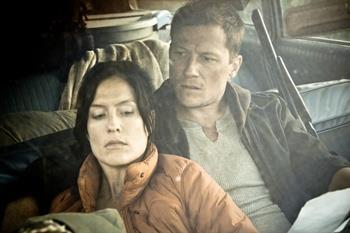 In the wilderness, John (Corin Nemec) finds a wedge of cash in a plastic bag.  Muttering ‘I can use this’, he throws away the money and keeps the bag – which, much later, he has to use to suffocate a murderous ‘berserker’.  Made in ten-minute chunks to facilitate non-traditional modes of distribution, this begins as an edgy update of 1960s alarmist armageddon movies like Panic in Year Zero but pulls back from its survivalist situation to reveal a more complicated world, drawing on 2000s neuroses like the fear of pandemic and the excesses of the War on Terror.  It has a serial-like narrative rush, with climaxes before every fade-out, and ends with a set-up for a potential further series of episodes.

The look is hand-held, bleached-out and generally jittery, which is appropriate to the genre.

Brief flashbacks establish that John and his wife Lynn (Kinsey Packard) were on the point of signing divorce papers when a mushroom cloud rose nearby and civilisation – at least in this locality – came to an end.  Bonding again as a couple, they have kept their teenage daughter Pauline (Pauline Cohn) safe but become separated from their young son, for whom they are searching.

The hills are inhabited by dangerous folk, who suffer from aggressive dementia rather than the expected radiation poisoning (a clue), and the nuclear family come into contact with two tribes – a band of savages run by a besuited former self-help guru (Ray Wise, bringing liveliness to the grim set-up) and a more civilised camp run by a guilt-ridden biochemist (Sharon Lawrence).

Beyond a barrier thrown up around the mountains is a military-scientific facility, run by the traditional goons in decontamination suits.  The family members split up and have individual adventures, and Pauline bonds with Zoe (young genre vet Danielle Harris), a circus knife-thrower whose skills come in handy.

Nuclear Family is low-budget pulp, but more serious in tone than writer-director Kyle Rankin’s previous apocalyptic effort, the insect invasion-themed Infestation – with strong performances, decent small-scale action scenes and an engagement with the issues raised by fall-of-civilisation scenarios that recalls the smart exploitation films Roger Corman used to produce and direct from the 1950s to the ‘70s.

Nemec, as a military-trained father figure, is a strong leading man, and supporting guest turns from a decent if lower-case cast deliver broad-strokes cameos which punch up the desperate situation.  The look is hand-held, bleached-out and generally jittery, which is appropriate to the genre.