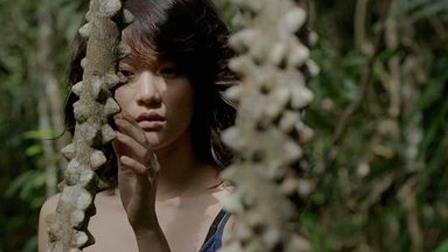 The latest outing from Thai auteur Pen-ek Ratanaruang is an abstruse ecological ghost story which builds its aura of other-wordly mystery slowly and uneventfully. Ratanaruang never was a fast-paced director but his last, the intriguing Ploy, was dramatically engaging, whereas Nymph – at least until its relatively action-packed last half hour – tries to wing it on atmosphere alone.

Lack of any musical soundtrack combined with the rather austere, colourless digital photography ask a lot of an already drama-deprived audience

Though Ratanaruang is a name on the international arthouse circuit, his stock seems to have been in decline since Last Life In The Universe – and Nymph probably won’t reverse the trend. With echoes of L’Avventura but also of fellow Thai director Apichatpong Weerasethakul’s Tropical Malady, Nymph tells the story of urban couple Nop (Jayanama) and May (Thai pop star Termthanaporn).

She’s a lowly executive cog in an anonymous firm, he’s an emotionally frozen photographer. Sent on a wildlife photography assignment, Nop takes May with him, and the two camp on the edge of the forest, with May giving her mobile phone more attention than her man. One night, Nop wanders off into the trees and never returns. A worried May turns for help and consolation to her boss, Korn (Wanwinwasara), with whom she’s having an affair. But when she gets home, Nop is there, asleep on the sofa; and May realises that she feels something for her husband after all.

The forest features prominently in Nymph as both backdrop and character. A prologue consisting of one long, measured tracking shot through the trees sketches in the legend of the wood nymph that underpins the story – the camera drifting away from the distant action (a pursuit, a rape, a double murder) as if only marginally interested.

Neither lush nor romantic, the forest is a place of shifting shadows and choking undergrowth, with harsh bird cries, wind and creaking trunks emanating a vague sense of unease.

Structurally unbalanced, Nymph takes too long leading up to Nop’s walk in the woods: up to this point we care little for the two characters, and their lack of communication seems to be shared by the filmmaker. Things pick up a little with Nop’s return home, when this laconic relationship drama, understated ghost story and eco-parable (“don’t hurt the trees, or they’ll hurt you”) start to gel into an everyday-supernatural tale with real atmopshere. But it’s rather too little rather too late – and the lack of any musical soundtrack combined with the rather austere, colourless digital photography ask a lot of an already drama-deprived audience.