Universal’s sci-fi scores $7.6m (£4.95m) debut, including previews, to knock The Croods off the top spot. 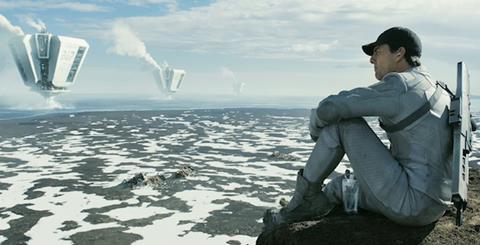 Achieving the second-best result of its international bow, Oblivion landed top of the UK box office preventing The Croods from a fourth straight week at the summit.

It’s worth noting that even without the preview boost, Oblivion would still have topped the chart.

As for director Joseph Kosinski, Oblivion’s debut is well ahead of Tron: Legacy’s $3m (£2m) and Oblivion will soon overtake that film’s final UK tally of $16m (£10.4m).

Despite falling to second, The Croods still enjoyed an excellent weekend, adding a further $3.1m (£2m).

Fox’s 3D animation is now up to $34.9m (£22.7m), surpassing the likes of Madagascar and Kung Fu Panda in terms of DreamWorks Animation original features and The Croods will overtake Shark Tale ($35.4m/£23.1m) this week.

The Weinstein Company confirmed a $1.7m (£1.1m) opening for horror spoof Scary Movie 5, released in the UK through Entertainment, seeing it chart third.

While that result is the lowest of the series, previous low was Scary Movie 2’s $2.4m (£1.6m), it’s still a solid debut given the last instalment of the series was released seven years ago.

The performance of the similarly-themed A Haunted House next month, released through Vertigo, will outline whether Scary Movie 5’s performance was predominantly down to brand affection.

StudioCanal’s The Place Beyond the Pines scored an excellent $1m (£671,478) debut, including $16,832 (£10,990) from previews, from its 114 sites for a stunning $9,021 (£5,890) average, the second-highest of the top 15 behind Oblivion. That result has already topped director Derek Cianfrance and Ryan Gosling’s previous collaboration, Blue Valentine.

As a result of its opening, StudioCanal will expand the crime drama from this Friday [April 19].

This week sees saturation releases for StudioCanal’s Evil Dead (opens April 18) and Lionsgate’s Olympus Has Fallen (opens April 17). Arrow’s Love Is All You Need receives a wide release as does Universal’s Promised Land, while StudioCanal’s Bait 3D and Dogwoof’s Fuck For Forest are among the films receiving a limited release.