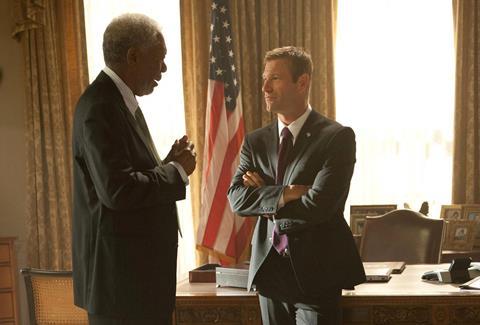 The action movie equivalent of the guy who, a couple years on from university, is still concerned with the sort of empty, cock-of-the-walk masculine posturing typically associated with teenagers, Olympus Has Fallen, or “Die Hard in the White House” as the pitch meeting surely went, attempts to graft geopolitical seriousness onto a swaggering siege tale, to ridiculous effect. A slick technical packaging by director Antoine Fuqua can’t offset the lumbering plotting and patchwork quality of producer-star Gerard Butler’s vehicle.

The thrill of the original Die Hard, the filmmakers seem to have forgotten, lay truly more in its brains than brawn.

Olympus Has Fallen is the first of two movies this year in which a Secret Service agent has to rescue the American president from a paramilitary takeover of his highly fortified residence (the other, Columbia/Sony’s White House Down, starring Jamie Foxx and Channing Tatum, arrives this June). In 1998, Deep Impact beat similarly themed mega-disaster movie Armageddon to theatres by almost two months, but the latter won out at the box office, by a cumulative margin of $550 million to $350 million. A more pronounced if smaller-grossing repeat of that one-two outcome seems likely, with mixed word-of-mouth and the impending G.I. Joe sequel cutting into Olympus’ action audience. Driven by its concept, ancillary prospects could be better.

Butler stars as Mike Banning, a former Secret Service agent still haunted by a professional failing 18 months earlier. During an important diplomatic visit, the White House comes under attack, and President Benjamin Asher (Aaron Eckhart) is hustled to his secure underground bunker. Banning scrambles to respond, and finds himself trapped upstairs in the White House as well.

At the helm of this siege is super-terrorist Kang Yeon-Sak (Rick Yune), who’s somehow managed to infiltrate the upper echelons of the South Korean government. While Speaker of the House Trumbull (Morgan Freeman), Secret Service Director Lynn Jacobs (Angela Bassett) and others try to weigh the options of Kang’s demands, they also take advantage of Banning as their eyes and ears on the ground, working with him to first try to get the president’s young son Connor (Finley Jacobsen) to safety, and then affect a broader rescue plan.

The first credited screenplay of writers Creighton Rothenberger and Katrin Benedikt seems the beneficiary of rush delivery, having been sold, cast and put into production in a span of less than five months last year, as part of the competition with the aforementioned White House Down. The attachment of such name talent no doubt necessitated a building outward of the narrative; almost 10 minutes is wasted on a cold opening whose only point other than widowing the president seems to be to sketch out a tragic professional backstory for Banning. The problem is that less is often more in a high-concept treatment like this, so by providing certain details it only highlights other inconsistencies or flaws in the story.

While the fact that its backdrop doesn’t track with current political American realities will matter less to international audiences, the movie’s ham-fisted treatment of torture and terrorism furthermore stands in stark contrast to recent big screen fare like the Oscar-nominated Zero Dark Thirty. This might be fine if Olympus Has Fallen had a more glib tone, and pop sheen. But the movie yearns to be taken seriously, and in fact goes out of its way to show bloody civilian carnage, with machine gun strafing opening up saucer-sized blotches in dozens of fleeing passers-by.

Meanwhile, the requisite one white collaborative traitor is included alongside swarms of henchmen who sport masks and visor-covered faces. In bending over backwards to seemingly avoid charges of xenophobia, this tack oddly has the opposite effect, further dehumanising Kang by association.

Director Fuqua is if not a complete virtuoso then certainly an extremely accomplished technical filmmaker, capable of dazzling action sequences. But even his skill sets can’t hold together poorly delineated set pieces, including a shootout that takes place partially within the White House walls.

Butler is a serviceable if somewhat boilerplate leading man, but by this point it’s almost a joke to cast Freeman in positions of omnipotent power (God, president). While he’s not technically the commander-in-chief here he does become the voice of authority, so it’s a bit of a shame to see him peddle the same sort of furrow-browed gravitas in a role that virtually cries out for a more complicated and barbed relationship with Banning’s impatient bluster. Everyone else is appropriately sombre, though their characters are often required to do and say things that are curious at best and stupidly reckless at worst.

The thrill of the original Die Hard, the filmmakers seem to have forgotten, lay truly more in its brains than brawn.