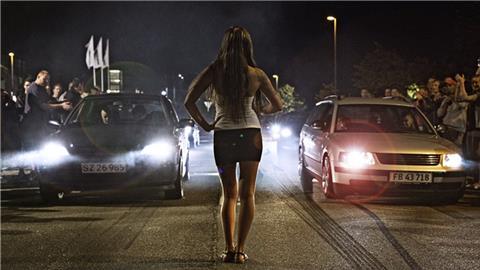 A Copenhagen-set The Fast And The Furious style drama/thriller but with a message, Christian E Christiansen’s impressively made On The Edge (Lev stærkt) is a striking film with a fine young cast and punctuated with adrenaline-high car racing sequences shot with real panache.

There is something pleasantly European about the action as he does not try to completely copy the visceral pleasures of the Hollywood Fast And The Furious franchise.

The film, which world premiered at the Rotterdam Film Festival, is in truth about fractured young relationships with a terrible accident causing the protagonists to dwell on what has happened to them. And while this is familiar fare, the street racing footage (shot in Aarhus and not actually Copenhagen) gives the film energy and thrills and could well help it appeal to savvy distributors.

Best friends Martin (the effortlessly cool Jakob Oftebro, from Kon-Tiki) and Nicolaj (Cyron Melville) work as mechanics by day, but their real passion is street racing. They dress in snappy suits to steal a new model Audi from a showroom, which helps pay for enhancements to the souped-up Ford Focus that Martin drives in a street race.

Martin is loosely involved with university student Signe (Danica Curcic, who along with Oftebro are 2014 EFP Berlin Shooting Stars), who Nicolaj is also smitten with, but keeps away from because of his friend’s involvement. But after a fight at a club Martin steals a high performance sports car and accidentally knocks down and kills a young woman pedestrian.

Wracked with guilt because he lies about his friend’s street racing involvement, which helps get the sentence reduced to manslaughter, Nicolaj seeks solace with Signe, a gentle soul who is taken with his kindness, but who also has her own reason for hating dangerous driving.

When Martin is released the scene is set for the two once best friends to confront each other, with Nicolaj having to eventually face up to the lies he has told both Martin and Signe.

This is street racing with a moral message that quite simply dangerous driving is very bad and that lives get lost. Yes the film aims to be a blend of The Fast And The Furious and Crime And Punishment, but its core is also the familiar story of young love being torn apart by lies, mistakes and recriminations.

The street racing scenes are excellently shot by Christiansen (this is his seventh feature, having made The Roommate and Where The Devil Hides in the US), and while it features the expected engine growling, tyre-screeching scenes (with the races started by the obligatory buxom beauty in a short skirt of course) there is also something pleasantly European about the action as he does not try to completely copy the visceral pleasures of the Hollywood Fast And The Furious franchise.

What also gives the film its honesty and energy are the fine performances from the three leads who exude charisma and are clearly talents to watch.