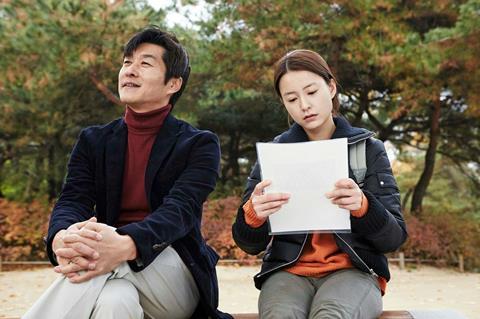 The second Hong Sangsoo this year, to follow on from his Berlin outing (Nobody’s Daughter Haewon) confirms the impression that the prolific Korean director, a faithful adept of the New Wave school which he constantly tries to emulate, could use more time before jumping from one project to the next.

Neither the plot nor any of the characters are more than lightweight caricatures.

Not only is there a distinct feeling of repeating himself to the point where he just seems to go through the same motions, but also that once he has got hold of a notion he rushes to put it on screen, before fleshing it out properly and fashioning its individual identity.

Once again, the plot of Our Sunhi (U ri Sunhi) is all about film academics and filmmakers, though cinema is not necessarily their main concern. The entire action is limited to a long series of dialogues shot in a staid Rohmerian fashion, each conversation drenched in massive quantities of alcohol.

The veiled humour evolves from the repetition of the same lines in different circumstances, the acting is supposed to be natural and spontaneous – though this once it looks a bit too studious and mannered for comfort – and the female protagonist has once more the upper hand over her suitors. The entire cast consists of four characters and more than anything else, the film suggests an exercise in indulgence by a director enamored with the images he puts on screen, mainly for his own gratification.

Sunhi (Jung Yumi), a presentable young woman who intends to complete her cinema studies in US, asks her former professor, Donghyun (Kim Sangjoong) for a letter of recommendation. He suggests she should better stop wasting her time on studies and put into practice what she has already learned, but when she insists, he promises to write the letter, warning her that he would put down his actual opinion of her and in case this does not satisfy her, she is free not to use it.

On her way out of the University campus, she calls former boyfriend, Munsu  (Lee Sunkyun) to join her in a fast food joint. He tells her he wants her back, she turns him down but won’t why and leaves. Next day, disappointed by the letter she gets from Donghyun, which says in so many words that she may be artistically inclined and that she is a good person, but also implies she is reserved, weak and never shows her real mettle. She vamps him off his feet and persuades him to write it again.

Finally, she invites the third man, Jaehak (Jung Jaeyoung), a film director who is the confidant of the other two, to have coffee with her, then tells him she’d rather have a stiffer drink and by the end of the evening, teases him all the way to his flat, but at the last minute turns down his offer to go all the way, pretending they have lots of time for that in the future.

Guessing the end of the tale is not very difficult, since all three men seem to find Sunhi, with whom they are smitten, pretty much of a mystery which they are at a loss to understand. Indeed, in their own encounters, as they pretend to share their impressions of Sunhi, without having the slightest idea that she is flirting with all three of them, separately, they use the same formulas they picked from each other, to describe her.

Since neither the plot nor any of the characters are more than lightweight caricatures and as the long talkathons lack the wit of the aforementioned Rohmer, they inevitably tend to wear out their welcome long before Hong Sangsoo is done with them. Film buffs will probably enjoy the quotes and winks that were so dear to the French cinema of the sixties, such as bars and cafes with names like Arirang or Gondry, or a reminder of the chicken sandwich without the chicken from Five Easy Pieces. But this is still a long way from the days from the pig who fell into the well.