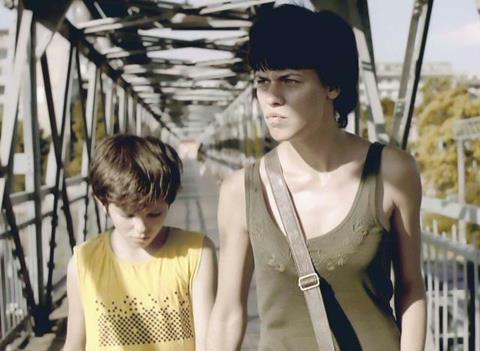 This bleak debut by young Romanian filmmaker Bogdan George Apetri, following the fate of a rebellious, self-destructing young woman making all the wrong choices in her life, seems better attuned to the expectations of the festival circuit – and indeed several of them have already shown interest – which may appreciate its downbeat message more than general audiences. Adapted from a story written a decade ago by Palme d’or winner Cristian Mungiu and Ioana Uricaru (one of Mungiu’s partners in his portmanteau production Tales from the Golden Age), this is the kind of film noir which despite being shot in full daylight, remains unflinchingly dark throughout, offering little comfort to either its heroine or her viewers. Outbound screened in competition at the Locarno International Film Festival.

Antagonizing everyone she encounters and rejected by all, she is the classic portrait of a loser who stands no chance for the very simple reason that she is her own worst enemy.

When her mother dies, Matilda (Ularu) is allowed 24-hours leave from prison, where she is serving a five-year sentence, to attend the funeral. But it soon turns out she has no intention of coming back. Outside the jail, a truck driver is waiting to smuggle her out of the country, to Constanta, where she will start a new life. All this in exchange for 1,500 Euros, which she believes she can get her hands on beforehand.

From this point on, the story is divided into three distinct chapters, one for every man in Matilda’s life. The first is Andrei (Vasluianu), her brother, married to prim, stuck-up Lavinia (Flora), unhappy to see the family black sheep landing on his doorstep and doing his best to get rid of her. The second chapter is dedicated to Paul (Branescu), Matilda’s sleazy former pimp and lover for whom she was turning S/M tricks and for whom she had taken the rap in the past. Since she has been in prison he has replaced her with another patsy and it takes a tragic event before Matilda manages to retrieve the money owed to her. The third man is Matilda’s 8-year-old son Toma (Duma), put in an orphanage by his father and doomed to grow up a social reject just like his mother. This is the most heart-breaking of the three episodes; her hopes of taking the boy along with her into a brighter future dispelled in the bleak mood reigning over the entire proceedings.

Obstinate, angry and desperate, Matilda marches head on into one disaster after another in a plot concentrated over a period of less than 24 hours, elliptically jumping every once in a while from one stage of the story to the next. Antagonizing everyone she encounters and rejected by all, she is the classic portrait of a loser who stands no chance for the very simple reason that she is her own worst enemy. Enhancing this trait, Ularu’s grim performance doesn’t attempt to elicit any kind of sympathy, her character bluntly driven to get her own way, whatever the circumstances in which she finds herself. Apetri relentlessly rushes on her tracks from one disappointment to another, through a script whose rough edges haven’t been quite worked out, closing down on her in Marius Panduru’s tight frames, offering just enough relief to keep her going from one chapter to another and leaving her stranded at the end in between a past she’s trying to escape and a future that remains as remote as ever.