Outside The Law (Hors La Loi) 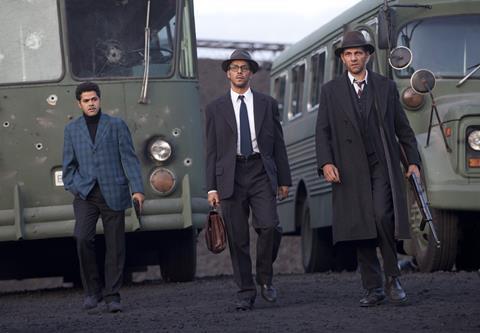 A fascinatingly under-documented period of recent history - the armed Algerian resistance movement within France in the 1950s - gets a slick gangster movie-style movie treatment from Rachid Bouchareb in Outside The Law. Reuniting much of the talent from his 2006 Cannes prize-winner Indigenes including the three main actors - Jamel Debbouze, Roschdy Zem and Sami Bouajila - the film is handsomely produced and always watchable even while the clichéd story built around the history threatens to derail it.

International sales could benefit from the storm of media attention and the portrait of the Algerian struggle for independence.

Critics looking for a companion piece to The Battle Of Algiers will be scornful of the formulaic conventions adopted here, but that audience-friendly melodrama will help it reach a wider French audience when it opens on Sept 22. Chances of success at home are especially high since the film has already sparked a furious controversy from right wing politicians, historians and war veterans over its content and issues of historical accuracy. Indeed security was tight at the Cannes screenings today with a ramped up police presence, body searches and confiscation of water bottles.

International sales could also benefit from the storm of media attention and the portrait of the Algerian struggle for independence; Bouchareb has called it the second of an Algerian trilogy and it could be an arthouse success overseas along the lines of Indigenes or other recent hot button movies such as The Baader Meinhof Complex or Gomorrah.

There is no doubt that French nationalists will struggle with the portrayal here of French oppression, from the massacre of at least 8,000 Algerians at Setif in 1945 to persecution on the ground in France and the establishment of a police-backed terror group called The Red Hand to battle the Algerian terrorists. But if Bouchareb opts for a too-simplistic good guys (Algerians) and bad guys (French) approach, he has to be applauded for tackling a sensitive subject which is still avoided in France - that of 132 years of French rule in Algeria and the bloody battle for independence that ended in 1962 with French defeat.

The movie opens with the eviction from his land on French orders of an Algerian man (Ahmed Benaissa), his wife (Boudraa), their three sons and two daughters. It then skips forward to the peaceful demonstrations of May 8, 1945, in Setif where thousands of Algerians marched to demand greater civil rights and French soldiers opened fire. The father of the family is killed as are the two daughters; one of the sons, Abdelkader (Bouajila) is arrested and taken to a prison in Paris, the other Said (Debbouze) pledges to take his mother to France to be near him. The third son Messaoud (Zem) is fighting on the French side in Indochina.

Once in Paris, Said and his mother set up home in an Algerian shantytown in Nanterre and Said starts to make a living as a pimp and low-level crook; once out of prison Abdelkader continues in the resistance movement, gradually climbing up the ladder of the FLN, he is joined in the struggle by Messaoud.

Abdelkader and Messaoud begin to take increasingly violent actions, killing members of the rival MNA party and policemen who are known to torture Algerians. They raise millions of Francs to fund the war effort and sabotage factories and fuel dumps. But eventually a former colonel from the French army called Faivre (Blancan) gets on their trail and the three brothers’ destinies are sealed.

The tone is more like The Godfather than a heroic WWII resistance movie or rousing historical epic (Malcolm X, Michael Collins) and Bouchareb spends a lot of screen time showing how the covert organisation is built up, murders committed and revenge taken in true Corleone style. As the leaders of the gang, Zem and Bouajila are fine and occupy the natural centre of the film while Debbouze’s character, the club owner and boxing promoter, is marginalised. Boudraa offers the much needed female presence and warmth as their long-suffering mother.