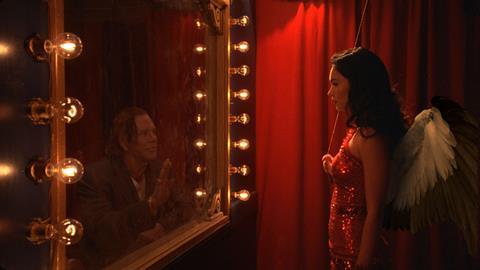 Screenwriter Mitch Glazer (Scrooged, The Recruit etc) seems intent on channeling the spirit of 1980s Alan Rudolph films in his long gestating directorial debut Passion Play. His gauche romantic fable serves up the corniest of clichés as it lugubriously charts the redemptive love between a once famous trumpet player and a carnival show freak with huge wings. The central premise fails to beguile or convince, even on a fantasy level, leaving the film little more than a whimsical curio.

Rourke works hard to gain our sympathy for Nate.

The resurgent star power of Glazer’s boyhood pal Mickey Rourke is unlikely to attract a mainstream audience to this labour of love. Specialist distributors will have to work awfully hard to secure modest returns on the basis of the name cast.

Developed over the past 20 years, Passion Play was originally intended to provide a starring role for Glazer’s wife Kelly Lynch who now co-stars as brassy bartender/dancer Harriet. There are echoes of Wim Wenders, Jean-Jacques Beineix and Wong Kar-Wai in a story with shadings of fatalistic film noir and the heightened artificiality that Alan Rudolph mined to more memorable effect in the likes of Trouble In Mind (1985).

Rourke is effectively cast in the mould of his The Wrestler character as another lost soul, battered and bruised by life’s vicissitudes. Audiences at the world premiere responding knowingly to dialogue asking what happened to the character’s fame and lost good looks. Rourke’s Nate Poole is a trumpet player in the manner of Chet Baker.

We first see him being driven into the Mexican desert where gangster Happy Shannon (Bill Murray) has ordered henchman Aldo (Chuck Liddell) to put him out of his misery. Bullets rings out but it appears that Aldo is the dead man as marauding Indians come to Nate’s rescue. He stumbles through the desert, discovering a carnival sideshow run by the fiery eccentric Sam Adamo (Rhys Ifans). The star attraction is Lily (Megan Fox with a husky Marilyn Monroe voice), a raven-haired beauty with real wings who has never seen the ocean. Nate is immediately smitten and the two soon become fugitives and lovers giving Nate one last chance to prove himself worthy of such a unique creature.

In the film’s favour, Rourke works hard to gain our sympathy for Nate but the script undermines his best intentions. Having discovered the great gift of this lovebird, Nate’s first instinct is to enter into a Faustian pact with a gangster to save his own skin and exploit her for financial gain. Events continually seem more like the crass contrivances of a screenwriter than something we can easily invest in.

Bill Murray provides wan moments of comic relief as deadpan gangster Happy but the film’s real star proves to be the cinematography of Christopher Doyle whose glowing sunrises, luscious red hues and dreamy aerial shots lend the film a polish that is all too evidently absent in other departments.