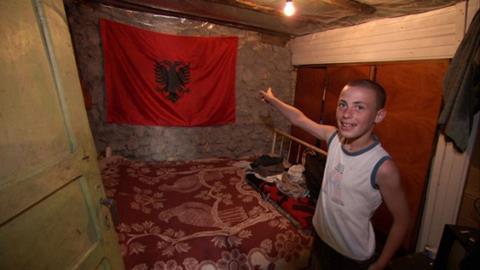 What is debt? In this cinematic philosophical inquiry inspired by Canadian author Margaret Atwood’s book Payback: Debt and the Shadow Side of Wealth, several disparate notions of payback are explored and interwoven, from the “ecological debt” human beings owe to the planet to the “psychic debt” inherent in notions of revenge. Those expecting a straightforward documentary, with facts and figures, about economic debt crises or the inequities of the IMF should look elsewhere. Payback is a meditative, thoughtful exercise that’s far subtler.

Directed by Jennifer Baichwal, known for her stunning 2006 documentary Manufactured Landscapes, which examined environmental catastrophe through the work of artist Edward Burtynsky, Payback is similarly sophisticated, both visually and intellectually, taking on global issues through an artful lens.

But while the film is never short on beautiful big-screen images, from the haunting cells of a defunct 19th Century Penitentiary to the landscapes of the Albanian mountains, Payback is a limited item, more suited for the most art-house friendly of venues and broadcasters. US distributor Zeitgeist Films, which also released Landscapes, will launch the documentary at New York’s Film Forum in April.

Loosely narrated by Atwood herself, seen typing on her computer and delivering her Payback lecture, Baichwal structures the film to keep the viewer on their toes. For example, it’s not entirely clear what an Albanian blood feud has in common with formerly imprisoned media mogul Conrad Black waxing eloquently on the injustice of incarceration. Or what the BP Gulf oil spill has to do with the horrible working conditions of mostly Latino tomato growers in Florida. That’s part of the intriguing nature of the documentary, but it can also be confounding.

Paybacktakes its time exploring these linkages, interweaving these different tales and showing how each is an example of the fickle ways that humanity tries to remedy (or fails to remedy) imbalances in society. Economic concerns underlie a number of the film’s issues (with a sprinkling of harsh capitalist critiques from ecologist William Rees and The Value of Nothing author Raj Patel). But Atwood and Baichwal are primarily interested in those debts that can’t be paid back with money.

If the vague connections between these notions of debt may be elliptical, what could be more problematic for viewers is the lack of context given to the people and stories presented in the film. Conrad Black’s complicated history as a disgraced corporate executive convicted of fraud is never explained. Nor does the film flesh out exactly how the tomato farmers of Immokalee, Florida became the equivalent of modern-day slaves. That’s the nature of the film: Rather than a conventional social issue chronicle, Payback picks and chooses from its anecdotes to prove a larger point about the way people owe—and are owed.

It’s a testament to the filmmakers’ intelligence and abilities that by the end of the film, these dissimilar strands come together, to some extent, in a quietly moving finale that calls for more giving—and less debt.