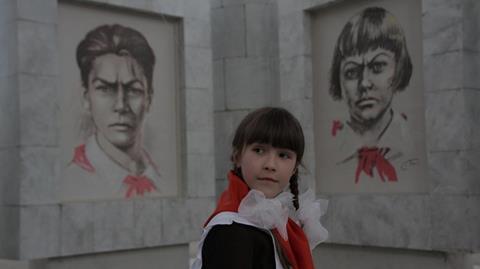 The recent red past gets a partial rehabilitation in Pioneer Heroes, which lurches between nostalgia and satire as it looks back fondly at the boy scouts and girl scouts of the Soviet Union.  Long and muddled, this debut feature by the writer/director/actress Natalya Kudryashova is unlikely to be released theatrically in many territories beyond its homeland, but its oddity could make it a curiosity on the festival circuit.

Kudryashova has taken on a huge subject, and in the over-long Pioneer Heroes, we have the problem of a first-timer’s script trying to say everything and producers who somehow were unable to rein her story in.

That story can still look stunning. Hero Pioneers begins with a vivid group portrait of Russian kids in the ‘Vladimir Illyich Lenin’ Young Pioneer organisation in 1987, brimming with personality as they are about to sing. Sergey, who is to perform a solo, wants to join with his peers – a true young pioneer who takes collectivism to heart?

The three former pioneers are as troubled as the rusty industrial or gleaming commercial landscapes are ugly, and Kudryashova suggests that nothing is what it used to be – when the Pioneers built discipline, morale and solidarity.

If the view in the rear view mirror of life here looks rosy, the scenes from contemporary Russia could hardly be clumsier, with odd sexual confessions from Olga; emptiness in front of a computer from Sergey (Aleksei Mitin), and Katya (Daria Moroz) confronted by an act of terror that couldn’t be more crudely obvious and racially profiled. (A study in contract is Elem Klimov’s 1964 satire, Welcome, or No Trespassing, which addressed the coercive elements of Pioneer life at a summer camp, when telling such a story brought real risks for a filmmaker.)

Kudryashova has taken on a huge subject, and in the over-long Pioneer Heroes, we have the problem of a first-timer’s script trying to say everything and producers who somehow were unable to rein her story in.  Even the inventive cinematography of Ruslan Gerasimenkov can’t save this project, although it does convey a sense of wonder and spirit in remarkably composed childhood scenes that point to much better work to come, perhaps even from Kudryashova. The children in the cast are also as notable as the film’s period magic – albeit over-rhapsodised – from not so long ago.

And releasing the state-supported film in Russia could have its problems, since the present-day former pioneers use profanity with abandon, which may require some overdubbing to comply with new Russian laws banning cursing in movies – another reminder that Russia isn’t what it used to be.

In today’s context, the Pioneers remind us of an observation by the late media theorist Marshall McLuhan, that when something ceases to serve a need, it either passes into obsolescence, or it becomes a work of art. In Pioneer Heroes, Kudryashova has seized on the latter approach, taking the memory of the mass regimentation of youth and making it decorous, with such merchandise as red scarves and pins that show Lenin as a young boy with curly hair. Art would have required her to be as skeptical of the past as she is of the present.